Nine years after Allegany County formed from part of Washington County in 1789 (Chapter 29, Acts of 1789), the Allegany County School was to be erected at Cumberland (Chapter 58, Acts of 1798). It would be located on Fayette Street, near Smallwood Road, where the St. Peter and St. Paul’s German Catholic Church later would stand (J. Thomas Scharf, History of Western Maryland, 1968, vol. 2, p. 1357). The first school in the County, it later moved and reformed as the Allegany County Academy. To purchase land and erect a schoolhouse, Visitors were named: John Lynn, Even Gwynn, William McMahon, Joseph Cresap, David Lynn, Patrick Murdock, Hanson Briscoe, John B. Beall, and John C. Beatty. They also were to hire a teacher, hold meetings to review the progress of the School, and appoint new visitors when vacancies occurred. By 1824, the Visitors were renamed the Trustees of Allegany County School (Chapter 4, Acts of 1824).

In 1812, a State fund for county public schools was established (Chapter 180, Acts of 1812). The Treasurer of the Western Shore was to distribute monies from the fund among all the counties, including Allegany; however, the funds raised were insufficient to support county schools. Nonetheless, the Treasurer of the Western Shore paid school funds to the School at Cumberland “as a public donation”. 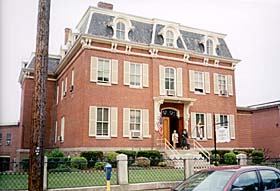 State School Fund Commissioners. The General Assembly, in 1816, appointed nine commissioners to oversee the State school fund in each county (Chapter 256, Acts of 1816). The commissioners were to “establish a central free school in each election district” and report to the General Assembly on how funds were used. In the colonial period, free schools offered a curriculum that included “Latin, Greek, Writing, and the like” (Chapter 31, Acts of 1694). [It is not clear from the 1816 law if the word “free” refers to the classical curriculum or the lack of tuition.] The Treasurer of the Western Shore was directed to pay Allegany’s portion of the school fund directly to the Levy Court, which would have the same authority as the commissioners of the State school fund.

County School Commissioners. In 1825, a statewide public education system was formed (Chapter 162, Acts of 1825). Justices of the levy courts in each county appointed nine school commissioners who were to divide the county into school districts. The levy courts also appointed up to eighteen inspectors of primary schools for each county. The inspectors' charge was to examine teachers, issue teacher certificates, visit schools, give suggestions to teachers and school trustees, and report to the county school commissioners. Elected by the voters of each school district, three trustees were to purchase schoolhouse sites, repair and furnish the schoolhouses, and hire all teachers within the district. Authorized to keep records of school commissioner meetings, a district clerk was elected by the voters annually. A district collector collected monies from school taxes.

By 1849, the Mayor and Council of the Town of Cumberland were named as a “board of trustees” to erect the Allegany County Academy near the courthouse, then located close to Johnson Street (Chapter 105, Acts of 1849; Morris L. Radoff, The County Courthouses and Records of Maryland, Part One: The Courthouses, 1960, p. 3). The Academy was allotted part of the State fund apportioned to Allegany County schools. [In 1929, the Academy closed and its building was leased in 1934 to the Cumberland Free Public Library.]

Board of Education. County school commissioners were renamed boards of education in 1916 (Chapter 506, 1916). They were to be appointed by the Governor without regard to political affiliation.

In 1951, the Allegany County Board of Education was composed of five members of whom at least two had to be women (Chapter 605, Acts of 1951). Also, at least two members were to represent the minority political party. By 1974, the Board came to be elected by the voters (Chapter 491, Acts of 1974). To be eligible as a candidate, a prospective member had to submit a petition signed by at least 200 county voters to the Board of Elections.

Today, educational matters that affect Allegany County are under the control of the Board of Education (Code Education Article, secs. 4-101 through 4-126).

The Board's five members are elected by the voters on a nonpartisan basis to serve four-year terms (Code Election Law Article, secs. 8-801 through 8-806). The Convention of Allegany County Association of Student Councils elects a student member to the Board every year. The President of the Board of County Commissioners is a nonvoting member. A president and vice-president for the Board are chosen annually in January (Code Education Article, secs. 3-201 through 3-204; 4-107). The Superintendent of Schools serves as the Board's executive officer, secretary, and treasurer (Code Education Article, sec. 4-102).

DISTRICT BOARD OF SCHOOL TRUSTEES

District boards of school trustees were authorized in 1825 (Chapter 162, Acts of 1825). They were to represent the voters of the school district. While their work supplemented that of the county boards of education, their duties shifted over time.

School District Trustees. For all Maryland counties, including Allegany, legislation was enacted in 1825 providing that three school district trustees were to be elected annually by the voters in each school district (Chapter 162, Acts of 1825). These trustees were authorized to purchase schoolhouse sites, build, furnish and repair schoolhouses, provide books, hire all teachers and make semi-annual reports to school commissioners. From the school commissioners, State monies were distributed to the school district trustees, who, in turn, were to pay teacher salaries.

In 1836, the Allegany County School District Trustees were granted school funds from the County as well as the State (Chapter 106, Acts of 1836). Two years later, five trustees were to “superintend the school”, furnish the collector with a list of taxpayers from whom to collect revenues, and receive monies from the treasurer of the County school fund (Chapter 204, Acts of 1838). The Trustees also were to hire certified teachers and meet quarterly to discuss school conditions. For each schoolhouse, the County School Commissioners appointed Trustees annually.

Directors: In 1860, Allegany County’s School Commissioners appointed three directors for each school district (Chapter 335, Acts of 1860). The directors assumed duties previously entrusted to school district trustees. In addition, directors were expected to call meetings of voters within the school district to decide which teachers would be hired and which textbooks purchased.

District Board. By 1868, school district trustees for all counties regained their former powers (Chapter 407, Acts of 1868). Reorganized as school district boards, they again assumed responsibility for all schoolhouses, land, and the hiring of teachers in their districts. Each board had three members: the county school commissioner of the “election district in which the school-house [was] situated”, and two members elected annually by the voters of the schoolhouse district. The elected members of the school district boards were to be representatives of the voters.

Board of District Trustees. Boards of district school commissioners again reformed in 1892 as boards of district trustees (Chapter 515, Acts of 1892). They were allowed to choose their own officers.

By 1918, district boards of school trustees, by unanimous vote, could “refuse to accept the original assignment of any teacher” to schools under their jurisdiction (Chapter 381, Acts of 1918). County superintendents, however, only were required to name three teachers to the school trustees for appointment. In times of emergency, school trustees were authorized to dismiss pupils or close schools. They also were to appoint janitors for each school.

The Allegany County Public School System is governed by the County Board of Education (Code Education Article, secs. 4-101 through 4-126). In addition, through the review and approval of the annual operating and capital budgets, Allegany County government exercises authority over the County Public Schools. Moreover, through the establishment and monitoring of various financial and academic policies and regulations, the State Department of Education also has considerable oversight of county public schools. Indeed, under Maryland law, the State Department of Education works with county public schools to comply with requirements and mandates of federal law.

In Fiscal Year 2018, the Allegany County Public School System had twenty-one schools: 3 high schools, 4 middle schools, 13 elementary schools, and one career and technical school. At the same time, 8,702 students were enrolled in the County's public schools.

School Inspectors. The duties of county superintendents of schools first were assigned to school inspectors in 1825 (Chapter 162, Acts of 1825). Levy courts were to appoint annually up to eighteen inspectors of primary schools for each county. The inspectors determined teacher qualifications, examined teachers, and issued teacher certificates. They also were expected to visit schools and offer suggestions to school district trustees. By 1835, the number of inspectors was reduced to three for each county (Chapter 278, Acts of 1835).

The Allegany County Board of Commissioners of Public Schools was authorized in 1860 to appoint a nonmember to serve as treasurer and secretary, roles later filled by the Superintendent of Schools (Chapter 335, Acts of 1860). The Commissioners also were to appoint a board of examiners to interview, test, and certify teachers. These duties later also were assigned to the Superintendent of Schools.

County Superintendent of Public Education. In 1904, county examiners were renamed county superintendents of public education (Chapter 584, Acts of 1904). Three times a year, they were required to visit each school in counties with 60 or fewer teachers. Twice a year, they went to schools in counties having more than 60 teachers -- among them Allegany County – and once in those counties with more than 175 teachers.

The Superintendent of Schools administers the Allegany County Public School System, and serves as executive officer, secretary, and treasurer of the Board of Education (Code Education Article, secs. 4-102; 4-201 through 4-206).

BOARD OF COLLEGE TRUSTEES
General control over Allegany College of Maryland is exercised by the Board of College Trustees.

The Board is appointed to six-year terms by the Governor with Senate advice and consent (Code Education Article, secs. 16-101 through 16-103).

SOUTH CUMBERLAND LIBRARY
The first branch of the Cumberland Free Public Library started in the fall of 1934. Formed in a classroom of the Pennsylvania Avenue School, it moved in January 1965 to 301 Virginia Avenue. Its present location at 100 Seymour Street was dedicated on December 12, 1982.

WESTERNPORT LIBRARY
At its present site, the Westernport Library was dedicated in February 1970.

LAVALE LIBRARY
At its current location, the Library was dedicated on September 28, 1975.

BOARD OF LIBRARY TRUSTEES
The Board of Library Trustees sets policy on operations, personnel, and finances for the Allegany County Library System.

Appointed by the Board of County Commissioners to five-year terms, the Board consists of seven members (Code Education Article, secs. 23-401; 23-403 through 23-407).