The Chesapeake Bay is the largest estuary in the nation and the third largest in the world. An estuary is a semi-enclosed coastal body of water with a free connection to the open sea where fresh water from inland rivers mixes with salt water from the ocean. 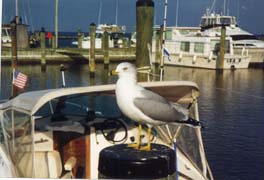 Seagull at pier, Chesapeake Beach, Maryland, December 2002. Photo by Diane F. Evartt. Some 35 million years ago, a bolide (an object similar to a meteor or comet) struck the present-day Delmarva Peninsula, creating a 55-mile-wide crater. The depression created by the crater changed the course of rivers and determined the location of the Chesapeake Bay. The first indigenous people settled the Chesapeake Bay area circa 9,500 B.C. Thereafter, the Bay, as we now know it, was created about 10,000 years ago (8,000 B.C.), when melting glaciers flooded the Susquehanna River Valley. Today, fresh water from land drainage measurably dilutes seawater within the Bay. 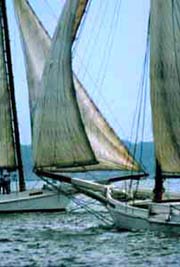 The Chesapeake Bay derives its name from the Algonquian word, Chesapiooc (Chesepiuk, Chesepiook, or Chesapoic), though its exact definition is unknown. While Diego Gutiérrez first depicted the Chesapeake Bay, named Bahia de Santa Maria, on his map in 1562, a variation of its current name, Chesapiooc Sinus, was printed for the first time on a 1590 map by John White. In June 1608, Capt. John Smith led two voyages throughout the Chesapeake Bay, and identified it as the "Chesapeack Bay" on his 1612 map. In its midst, European settlers first landed at St. Clement's Island, Maryland, in 1634. Through the lower portion of the Bay, pirates settled and attacked ships off the coast. And, at its southernmost reaches during the Civil War, the first ironclads, the Confederate Virginia (formerly the USS Merrimack) and the Union's Monitor, fought to a draw near Hampton Roads, Virginia, in March 1862. Many shipwrecks, remains of vessels sunk by natural forces, human error, or attack, lie deep beneath the Chesapeake Bay.

Generations of watermen have made their living harvesting the bounty of the Chesapeake, while recreational fishing, hunting, and boating attract millions of people each year and contribute significantly to Maryland's economy. Major annual seafood harvests include millions of bushels of crabs, oysters, clams, and eels.

For ocean-going ships, the Bay is navigable with two outlets to the Atlantic Ocean: north through the Chesapeake and Delaware Canal in Cecil County, and south through the mouth of the Bay between the Virginia capes. Two of the nation's top ports, Baltimore, Maryland, and Hampton Roads, Virginia, are located on the Chesapeake Bay.

Further information about the Bay, including its history and effect on regional culture, may be found at the Chesapeake Bay Maritime Museum at St. Michaels. 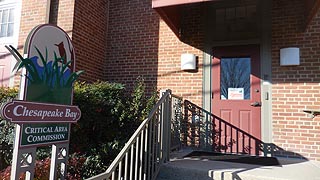 Sixteen of Maryland's 23 counties and Baltimore City border on tidal water. The Chesapeake Bay and its tributaries follow 11,684 miles of shoreline and 4,480 square miles of surface area. Such an extensive shoreline allows for over 700 public access points on the Chesapeake Bay.

The rivers, creeks, streams, and smaller bays which flow into the Chesapeake Bay, the land surrounding them, and the Bay itself make up the Chesapeake Bay watershed. About 51 billion gallons of fresh water empty into the Chesapeake Bay daily from the 150 major rivers and over 100,000 tributaries. Three main tributaries flow into the Bay, and contribute 80% of the Bay's fresh water. The largest of these is the Susquehanna River, followed by the Potomac River, and Virginia's James River. The watershed runs about 524 miles, from New York to Virginia, while the area itself totals some 64,000 square miles in parts of six states: Maryland, Delaware, Pennsylvania, New York, Virginia, West Virginia, and the District of Columbia. Maryland, Delaware, and Pennsylvania work together on the Bay's behalf through the interstate Chesapeake Bay Commission. 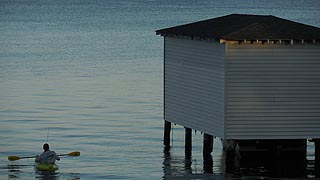 The Bay watershed provides rich habitat for an abundance of life, and some eight million of its acres are permanently preserved. This diversity enables some 3,600 different species of plants and animals to live in the Bay area. In addition to species of fish and wildlife, plants play a vital role in the Chesapeake Bay. Wetlands and tidal grasses provide habitat and protection for various species, while forests also filter water. The Bay also supports large winter populations of migratory waterfowl and provides spawning, nursery and feeding grounds for ocean fish. A third of the Atlantic Coast's migratory birds winter over on the Chesapeake Bay, including 87 species of waterbirds.

Research on the Chesapeake Bay and its watershed is conducted by the University of Maryland Center for Environmental Science at Cambridge, and the Smithsonian Environmental Research Center at Edgewater.

According to the Chesapeake Bay Program, more than 18.4 million people lived within the Bay's watershed as of 2020. Scientists project that the population of the watershed will reach 22.3 million by 2050.