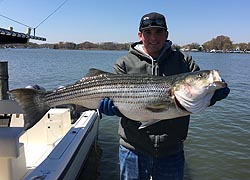 The Rockfish (Morone saxatilis) was named the official fish of the State of Maryland in 1965 (Chapter 513, Acts of 1965; Code General Provisions Article, sec. 7-305). Originally called Roccus saxatilis, scientists corrected the genus designation in the late 1960s.

Known for its size and fighting ability, the rockfish also is called striped bass. It has an olive green back, fading to light silver on its sides, with a white underside. Seven or eight dark, continuous stripes run from head to tail.

In designating the State fish, the General Assembly prefaced the 1965 law by noting:

"Whereas, The people of Maryland as long time and appreciative residents of the productive Chesapeake Bay area know of it first hand the recreational and gastronomic delights of this wonderful land, and

Whereas, Not the least among the good reasons for living in Maryland is the abundant and unexcelled delicacy of the Chesapeake Bay striped bass or rockfish, and

Whereas, In the judgment of the members of the General Assembly of Maryland, it is a simple act of justice and of equity that this fine old Maryland fish should be honored by being designated as the official fish of the State of Maryland . . . " 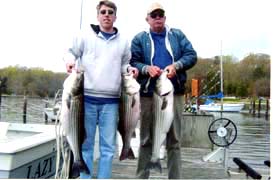 Rockfish is considered by many to be the premier sport and commercial species on the Bay. The silver-flanked, iridescent-striped rockfish is a challenge to catch and a delight to eat. The current Maryland record for rockfish caught in Chesapeake Bay weighed in at 67 pounds, 8 ounces in 1995. Declining stocks, attributed to overfishing and pollution, forced Maryland to impose a moratorium on harvesting the species between 1985 and 1989. While the number of rockfish has increased, regulations are in place to ensure the species' survival in Maryland waters.

Adult rockfish swim in the ocean but lay their eggs in fresh water. Between April and June, rivers and streams feeding Chesapeake Bay provide spawning grounds for most Atlantic Coast rockfish. Those born in the Bay spend their first 3 to 5 years there before migrating out to the Atlantic, where their life span may be as long as 30 years.