The blue crab's scientific name translates as "beautiful swimmer that is savory." Blue crab meat sometimes is compared to the sweetness of lobster meat; the flavor best appreciated by cracking and eating steamed hardshells or feasting on softshells. Crab is prepared in restaurant and home kitchens in innumerable ways, steamed or sauteed, as Maryland Crab Cakes and Crab Imperial, or in crab soup and crab dip. 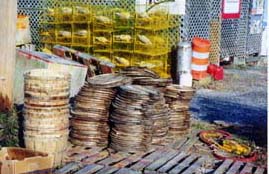 Providing a seafood bounty, life becomes tenuous for baby blue crabs. As they grow from a larval stage to a recognizable crab shape, most fall prey to predators. Few survive their first year. For those who do, their life expectancy in Chesapeake Bay is estimated at 2 and 1/2 to 3 years (as of October 2000). Most are harvested, however, before they get any older. Under better circumstances, scientists believe that blue crabs could live as long as 8 years. 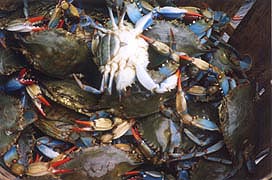 The brackish (slightly salty) water of Chesapeake Bay provides an ideal habitat for the blue crab. Integral to the State's economy, its harvest is carefully nurtured and eagerly anticipated. In harvesting, commercial crabbers use crab pots as their main tools. Trotlines preceded this method and served well for many years. Indeed, stalwart recreational fishermen still prefer crabbing the old-fashioned way, with a dip net. 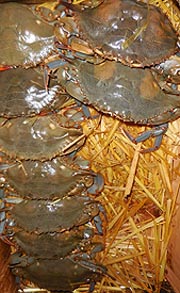 Blue crabs are harvested as hard shell crabs, peeler crabs (just prior to molting), and soft shell crabs (immediately after the molt). The just-right salinity waters of the Wye and Chester Rivers and Eastern Bay frequently result in the harvesting of giant males, called "jimmies." In Maryland, the legal size for harvesting male crabs is 5 inches or more across; peelers, 3 inches across; and soft crabs, 3 and 1/2 inches across. No size limits are set for mature females ("sooks").

In Maryland, blue crabs are the most valuable commercial fishery. The annual catch of hard crabs from the Chesapeake Bay accounts for over 50 percent of total landings. For regulations governing blue crabs, see: http://dnr.maryland.gov/fisheries/Pages/regulations/blue-crab.aspx. 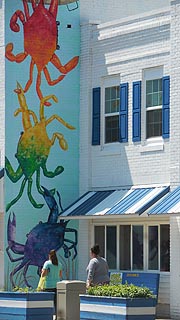 The annual National Hard Crab Derby and Fair is held each Labor Day weekend on the Eastern Shore in the town of Crisfield, Somerset County, Maryland. There are held crab races, a crab picking contest, a crab cooking contest, and the traditional crab feast! At the Somers Cove Marina, the next Derby will be held Labor Day weekend 2017.

At the upper level of Baltimore-Washington International (BWI) Airport, a stained-glass blue crab is on display.