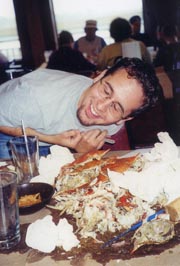 Bay Scallops. The bay scallop usually is around 3.5 inches in size, and is available year-round. Scallops are commonly pan seared, then sautéed in butter, or breaded and deep fried. The light flavor, and soft texture of the meat makes scallops a natural addition to pastas, salads, and stews. 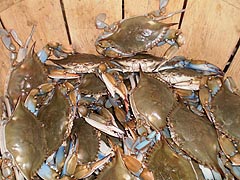 Blue Crabs. Plentiful from late spring through fall, blue crabs turn red when steamed. They measure five to seven inches across at maturity.

Soft-shell crabs are blue crabs that have outgrown and therefore shed their hard outer shell and whose new shells have not yet hardened. Soft-shell crabs generally are available from May through September.

The Maryland Blue Crab is the State Crustacean. 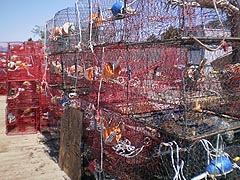 Bluegill. Known for its small size, large numbers, and distinctive gill coloration, the bluegill is most readily available between April and September. Bluegills average approximately six inches, but may reach as large as twelve inches. Because of its size, bluegill is most often pan-fried, but also frequently deep-fried. 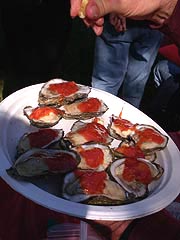 Eastern Oyster. A year-round delicacy, oysters may be purchased several ways: live, fresh shucked, frozen, or canned. The Eastern Oyster can grow to around eight inches, although between four and five inches is more common in the Chesapeake Bay. When purchasing live oysters, the shell should be tightly sealed, or close quickly when touched. Due to spawning, texture may vary during the summer months.

Oysters on the half-shell, Shady Side, Maryland, October 2011. Photo by Diane F. Evartt. 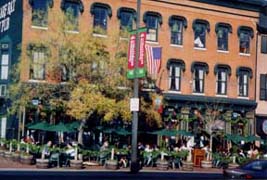 Rockfish. Also known as striped bass, rockfish may be caught year round, although peak seasons occur in spring and fall. Rockfish is very versatile when served, and may be baked, broiled, or grilled. Considered a delicacy due to its firm texture and mild, sweet flavor, the rockfish also is farm raised in Maryland.

The Rockfish is the State Fish.

Soft-Shell Clam. Soft-shell clams are available year-round, and are distinguished by brittle shells and long siphons. Also known as steamers, these clams ingest sand, and should be “purged” prior to cooking. To store them, clams should be refrigerated in a ventilated container to prevent spoiling.