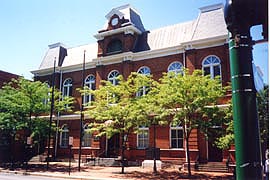 For the public, the Circuit Court Clerk performs certain court duties, such as filing, docketing, and maintaining legal records; recording documents that involve title to real estate; and collecting the fees, commissions, and taxes related to these functions. The Clerk also issues certain licenses. In this process, the Clerk's Office collects and distributes funds on behalf of the State, and Washington County and its municipalities.

Under the Circuit Court Clerk are six departments: Civil, Criminal, Juvenile and Child Support, Land and Licensing, Recording and Licensing, and Records Management.

COURT ADMINISTRATION
For the Circuit Court, the Court Administrator oversees the Assignment Office, Family Support Services, and the Law Library.

The Sheriff is responsible for the Detention Center, the Judicial Services Division, and the Patrol Division.

DETENTION CENTER
The predecessor of the Detention Center was the County Jail. Constructed at the end of the eighteenth century, the Jail was located in Hagerstown in an alley between Washington and Franklin Streets. A log structure, it had no windows, and was replaced in 1826 by a new jail, built of logs, on North Jonathan St. That building was destroyed by fire in 1857. Rebuilt in 1858, and remodeled in 1888, it was replaced by the Detention Center which opened in June 1984. The old Jail was demolished in 1985.

CENTRAL BOOKING UNIT
Construction of the Central Booking Unit (which was added to the front side of the Detention Center) started in 2009 and was completed in May 2010.

The District Court of Maryland began operating as a court of record in July 1971. It had been created by constitutional amendment in 1970 (Chapter 789, Acts of 1969, ratified Nov. 3, 1970; Const., Art. IV, secs. 41A through 41-I). In Washington County, the Court replaced the county trial magistrates.

The Orphans' Court supervises the handling of estates of people who have died (with or without a will) while owning property in their sole name. The Court also has jurisdiction over guardianships of minors.

The Register of Wills serves as clerk to the Orphans' Court, oversees the administration of the estates of those who have died, and provides assistance to individuals administering those estates. In addition, the Register of Wills collects inheritance taxes and other fees (as provided by law), which fund operations of the office. Inheritance tax collections (less the commissions earned on those collections) are remitted to the State's General Fund.