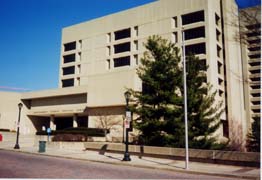 For the public, the Circuit Court Clerk performs certain court duties, such as filing, docketing, and maintaining legal records; recording documents that involve title to real estate; and collecting the fees, commissions, and taxes related to these functions. The Clerk also issues certain licenses. In this process, the Clerk's Office collects and distributes funds on behalf of the State, and Montgomery County and its municipalities.

Operating expenses for the Clerk's Office primarily come from State General Funds. Certain support services, such as payroll and invoice processing, and maintenance of budgetary accounting records, are provided by the Adminstrative Office of the Courts.

Under the Circuit Court Clerk are the Courtroom Clerks, the Finance Office, and six departments: Civil, Criminal, Family, Juvenile, Land Records, and License.

COURT ADMINISTRATION
For the Circuit Court, the Court Administrator oversees the Assignment Office, the Office of Court Evaluators, Family Division Services, the Jury Office, the Law Library, Technical Services, and the Trust Office.

The Council's purpose is to reduce the incidence of domestic violence and create safe communities in which families can live free of abuse.

The District Court of Maryland began operating as a court of record in July 1971. It had been created by constitutional amendment in 1970 (Chapter 789, Acts of 1969, ratified Nov. 3, 1970; Const., Art. IV, secs. 41A through 41-I). In Montgomery County, the Court replaced the county trial magistrates, and the People's Court.