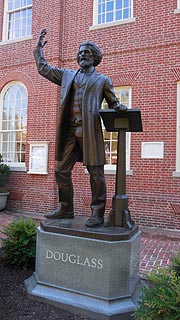 Douglass was born Frederick Augustus Washington Bailey in Tuckahoe District, Talbot County, on the Eastern Shore of Maryland, February 1817. Although a slave, he escaped north and became an abolitionist and champion of universal suffrage.

c. 10,000 B.C. First humans, called Paleo-indians, arrived around this date in the land that would become Maryland. They lived in small semi-nomadic communities that moved seasonally to hunt large game, such as bison and mammoths, created weapons and tools, and engaged in trade with other groups.

c. 800 A.D. Native-American introduction of domestic plants, including corn, tobacco, and squash; bow and arrow came into use; animals domesticated.

c. 1000 A.D. Permanent Native-American villages established near water and wood sources, also in areas with rich soil for agricultural crops. Tribes eventually formed into larger groups known as chiefdoms, each one led by one leader.

*The Juan de la Cosa world map (1500) indicated that Cabot, the only explorer sailing the North American coast at that time under the British flag, may have coasted as far south as Cape Hatteras.

1562. Diego Gutiérrez, a Spanish cartographer, was the first person to depict the Chesapeake Bay, what he called the Bahia de Santa Maria, on a map.