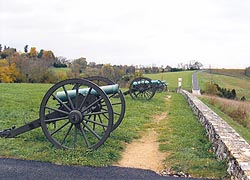 One way to approach Maryland's history is through its historic trails. Maintained by government agencies, such as the Office of Tourism, the State Highway Administration, and the National Park Service, these trails follow paths over which historical figures strode (or sailed!). From colonial explorations of Captain John Smith over Chesapeake Bay and its inlands, to Harriet Tubman's routes on the Underground Railroad, these trails crisscross the whole State, and were integral to the expansion and advancement of the nation. 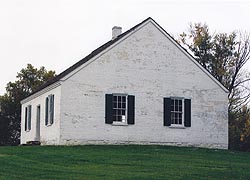 Antietam Campaign: Lee Invades Maryland Trail
Covering 90 miles, the Antietam Campaign: Lee Invades Maryland trail follows the movements of the Union army under Major General George B. McClellan and Confederate forces under General Robert E. Lee as they traveled towards each other in September 1862, meeting near Sharpsburg, Maryland. The trail also passes through Virginia, and West Virginia. 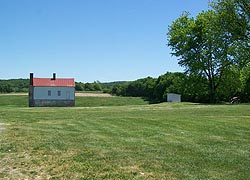 Attack on Washington: The Last Invasion
The Attack on Washington: The Last Invasion trail follows the route taken by Confederate Lieutenant General Jubal Early's army in July 1864 when it invaded Maryland and attacked Washington, DC. The trail also follows the routes taken by Confederate cavalry forces under Brigadier General Bradley Johnson and Major Harry Gilmor after they were sent to cut communication and railroad lines around Baltimore and to free the 15,500 prisoners held at Point Lookout in St. Mary's County. The trail also passes through Washington, DC, Virginia, and West Virginia. 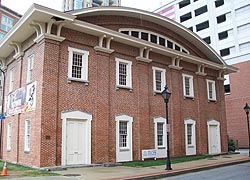 Baltimore: A House Divided
The Baltimore: A House Divided trail includes sites both in Baltimore and in the surrounding counties. In Baltimore, the Riot Trail follows the route taken by the 6th Massachusetts Infantry Regiment on April 19, 1861 when, while transferring to a Washington-bound train, it was attacked by Confederate sympathizers in the first bloodshed of the Civil War. 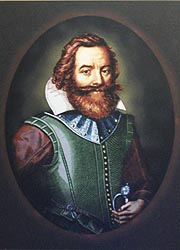 Travelers on the Smith Trail can use the Boater's Guide, as well as Smart Buoys, part of the National Oceanic and Atmospheric Administration's Chesapeake Bay Interpretive Buoy System (CBIBS). The buoys are located at 10 sites throughout the Bay and alert boaters to water and weather conditions, navigation aids, and historical descriptions of the area from the early 1600s. 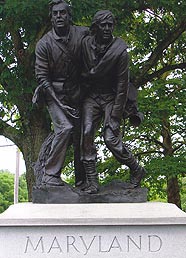 Gettysburg: Invasion & Retreat Trail
The Gettysburg: Invasion & Retreat trail is actually five separate routes through Maryland, Pennsylvania, Virginia, and West Virginia. These trails follow the Union Army of the Potomac under Major General George G. Meade and Confederate Army of Northern Virginia under General Robert E. Lee during June and July 1863, as they traveled north towards each other and to Gettysburg, Pennsylvania. 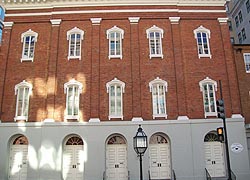 Potomac Heritage National Scenic Trail
The Potomac Heritage National Scenic Trail, which was established in 1983, is actually a network of trails that extends over 700 miles through Maryland, Washington, DC, Pennsylvania, and Virgina. It connects different trails and sites that relate to the nature, history, and culture of the Potomac River region. In Maryland, the Trail includes the Great Allegheny Passage rail-trail in Cumberland, the Chesapeake and Ohio Canal, and the Southern Maryland Potomac Heritage Trail Bicycling Route. 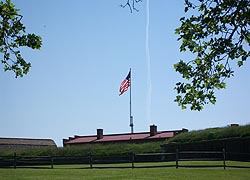 Fort McHenry, Baltimore, Maryland, May 2015. Photo by Sarah A. Hanks.

Washington-Rochambeau National Historic Trail
The Washington-Rochambeau National Historic Trail extends over 680 miles through land and water in 10 states, from Massachusetts to Virginia. It connects cities, parks, historic sites and trails that are on the routes that the Allied Armies under General George Washington and French General Jean Baptiste Donatien de Vimeur, Comte de Rochambeau, used when marching south from Newport, Rhode Island, to Yorktown, Virginia, in 1781 and back in 1782. The Trail includes sites throughout Maryland, from Elkton to College Park.