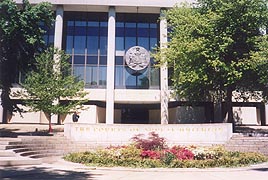 As the highest tribunal in Maryland, the Court of Appeals was created by the Constitution of 1776 (Art. 56). The Court was to be "composed of persons of integrity and sound judgment in the law, whose judgment shall be final and conclusive in all cases of appeal, from the general court, court of chancery, and court of admiralty . . ." With Council advice and consent, the Governor appointed all judges (Art. 48). Five judges were commissioned in 1778, and that number reduced to three in 1801.

The Court was restructured in 1806 by dividing the State into six judicial districts (Chapter 55, Acts of 1804, ratified 1805). For each judicial district, the Governor and Council appointed a chief judge and two associate judges. Together, these six chief judges constituted the Court of Appeals which began to sit on the Western Shore in Annapolis, as well as on the Eastern Shore at Easton.

The State was reorganized into four judicial districts by the Constitution of 1851. Voters of each district elected a judge to the Court of Appeals for a ten-year term. The Court became responsible solely for appellate duties and sat only at Annapolis (Art. IV, secs. 2, 4). Thereafter, five judges, each elected from one of five judicial districts, were prescribed by the Constitution of 1864 (Art. IV, sec. 17). 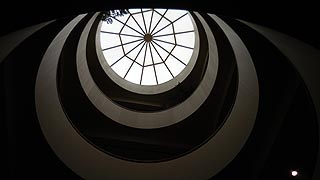 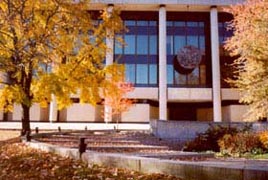 Cases are heard by the Court of Appeals almost exclusively by way of certiorari (i.e., on review), a process which gives the Court the ability to decide which cases to hear. The Court may review a case decided by the Court of Special Appeals or may bring up for review cases filed in that court before they are decided there. Moreover, the Court of Appeals may review certain decisions rendered by the Circuit Court if that court acted in an appellate capacity on an appeal from the District Court. The Court of Appeals, however, is required by law to hear cases involving the death penalty, legislative redistricting, removal of certain State officials, and the certifications of questions of law.

The Court may adopt rules of judicial administration, practice, and procedure which have the force of law. It also reviews recommendations of the State Board of Law Examiners and conducts disciplinary proceedings involving members of the bench and bar.

Throughout the year, the Court of Appeals holds hearings on the adoption or amendment of rules of practice and procedure. It also supervises the Attorney Grievance Commission and admits persons to the practice of law (Code Courts and Judicial Proceedings Article, secs. 12-301 through 12-307). The term of the Court begins the second Monday of September.

The Court of Appeals is composed of seven judges, one from each of the seven Appellate Judicial Circuits. After initial appointment by the Governor and confirmation by the Senate, members of the Court run for office on their records without opposition. If the voters reject the retention in office of a judge, or the vote is tied, the office becomes vacant. Otherwise, the incumbent judge is retained in office for a ten-year term. The Chief Judge of the Court of Appeals, designated by the Governor, is the constitutional administrative head of the Maryland judicial system (Const., Art. IV, secs. 5A, 18(b)). 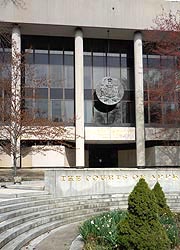