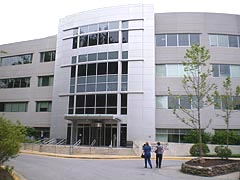 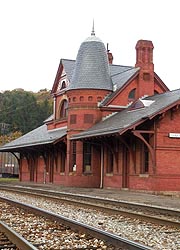 Passengers with disabilities may use regularly scheduled lift-equipped service; and Mobility, a van and taxi service for those who cannot use MTA buses. 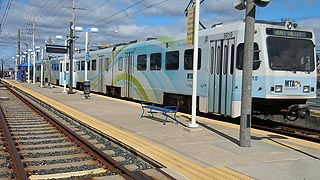 Begun in 1992, the Light Rail Line of electric-powered trains runs 30 miles through the central corridor of Maryland from Hunt Valley in Baltimore County, through the heart of Baltimore City, past Oriole Park at Camden Yards, to Cromwell Station/Glen Burnie in Anne Arundel County. Extensions run to BWI Thurgood Marshall Airport and Penn Station at 1500 North Charles Street, Baltimore. The entire line takes about one hour and fifteen minutes to travel. The Light Rail links to buses and subways with free parking at many Light Rail stops. The Line is run by Light Rail Operations of the Maryland Transit Administration.

Two lines run between Baltimore and Washington, DC: the Camden Line and the Penn Line. One line links Martinsburg, West Virginia, and Brunswick, Maryland, to Washington, DC. The service extends to Frederick from Point of Rocks on the Brunswick Line. Service also runs north of Baltimore on the northeast corridor into Harford and southern Cecil counties with routes ending at Perryville. Fares range from $5 to $13 one way, depending on distance traveled. 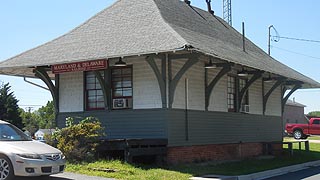 The Maryland Transit Administration contracts out operations for three freight lines on the Eastern Shore and two through Frederick and Carroll counties, covering over 150 miles. Additional service is provided for passengers by Amtrak and for freight by CSX Transportation and Conrail. 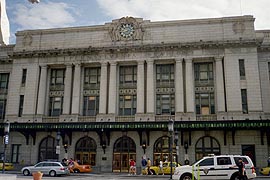 Of historical note, the Baltimore and Ohio (B&O) Railroad Company was chartered by the General Assembly in 1827 to construct a transportation link to the west, establishing the nation's first long-distance railway.

Subways operate in the Baltimore and Washington, DC, areas. They are provided by the Maryland Transit Administration (MTA), and the Washington Metropolitan Area Transit Authority (WMATA).

The MTA's Baltimore Metro has 14 stations. It runs 15.5 miles from Owings Mills to Johns Hopkins Hospital in Baltimore, carrying an average of 49,000 passengers daily. Full fares range from $2.00 for a one-way trip to $4.60 for unlimited rides on an all-day pass. Tickets may be purchased at vending machines in the stations, or on-line at https://mta.maryland.gov/pass-store.

The Washington Metrorail has 5 lines, 86 stations, and 106.3 miles of track. Two Maryland counties - Montgomery and Prince George's - are in its transit zone. For fare information, see: www.wmata.com/fares/metrorail.cfm