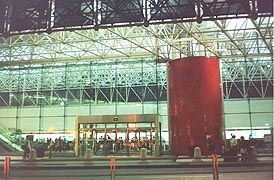 Throughout Maryland are 33 public-use airports. The State of Maryland owns and operates two airports: Baltimore/Washington International (BWI) Thurgood Marshall Airport, and Martin State Airport. Both are run by the Maryland Aviation Administration, an agency of the Department of Transportation.

Maryland's aviation history dates to the 18th century, when possibly the first recorded manned flight occurred over Baltimore in a balloon in 1784. Not until the 20th century, however, did Maryland pass its Uniform State Law for Aeronautics until 1927 (Chapter 637, Acts of 1927). Two years later, it established the State Aviation Commission (Chapter 318, Acts of 1929). The Commission licensed aviators and airships, set air traffic rules, regulated the construction and operation of airfields, and otherwise conformed to federal regulations. In 1970, the Commission was reorganized as an administration and made part of the newly formed Department of Transportation. In 1972, the State Aviation Administration took over operation of Friendship International Airport (now BWI Thurgood Marshall) after its purchase by the State. At that time, the number of Administration employees rose from three to over two hundred. The Administration was renamed the Maryland Aviation Administration in 1989.

Ranked as the region's busiest airport, BWI Thurgood Marshall Airport is one of the fastest growing large airports in the United States. Just south of Baltimore City, the Airport lies on nearly 3,600 acres in northern Anne Arundel County.

Airlines. Thirty-six airlines (including commuter, charter & cargo airlines) serve BWI with 660 commercial daily flights passing through its 5 concourses, 73 jet gates, and 2 commuter gates. As of Dec. 31, 2021, BWI offers more than 320 daily nonstop flights to over 81 domestic and international destinations. Also as of Dec. 31, 2021, there were 9 airlines providing service to international destinations at BWI.

Passengers. As of January 2018, BWI broke monthly passenger records 29 times over the previous two and a half years.

In 2018, more than 27.15 million passengers flew through BWI, with an average of 74,372 per day, an all-time record high. In 2016, over 1.23 million international passengers passed through BWI, the second year that the Airport had passed the million per year milestone.

In February 2022, Airports Council International honored BWI with a Voice of the Customer recognition.

In October 2018, BWI ranked tenth on Condé Nast Traveler's Best Airports in the U.S.: 2018 Readers' Choice Awards due to its access to transit, amenities for passengers, and efficiency.

In 2014, the Physicians Committee for Responsible Medicine ranked BWI first for healthful meal options, with over 90% of restaurants offering at least one healthy meal option.

In 2009, the Airports Council International ranked BWI Thurgood Marshall Airport first for airport service quality among airports around the world that served 15 to 25 million passengers annually.

Providing a 24-hour U.S. Customs operation, BWI Thurgood Marshall Airport is designated an official port of entry by the U.S. Fish and Wildlife Service. In 1997, the Airport also was designated as a European gateway for the U.S. Air Force's Air Mobility Command. In addition, the Airport has a foreign trade zone in the Air Cargo Center. With scheduled refrigerated trucking to major destinations in the Baltimore-Washington region, the Airport offers on site a 24-hour cold storage facility.

To expand and enhance service and beautify Airport facilities, a multi-million dollar construction program began in 1994 and continues. Some 3,400 public parking spaces were added to satellite lots, and a new daily parking garage opened in 2002. Since completion in 2003, the garage offers 8,400 parking spaces with a "Smart Park" vehicle guidance system to help travelers find an open parking space. As of 2016, there are 31,300 parking spaces available at BWI, including those in the holiday and overflow lots and the rail station. A 10,500-foot runway now better accommodates long-haul traffic. 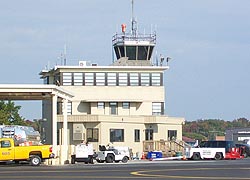 One of the largest general aviation facilities on the East Coast, Martin State Airport is in southeastern Baltimore County. The Airport handles primarily private and corporate aircraft. Yet, it is the headquarters of the Aviation Division (MED-EVAC) of the Department of State Police; the Helicopter Unit of the Baltimore City Police; and the Aviation and Marine Units of the Baltimore County Police. Martin State also provides aircraft repair and avionics facilities on site, conducts flight schools, and hosts the Glenn L. Martin Aviation Museum.

Martin State Airport began in 1929 as an airplane production facility built by Glenn L. Martin, an aviation designer and constructor. Before and during World War II, the Glen L. Martin Aircraft Company produced the B-10 and B-26 bombers, the China Clipper, and the Martin Mars planes at the facility. Runways also were added during the War period.

Flights arriving at Martin State Airport from international locations began to be processed by U.S. Customs and Border Protection in 2016.

In FY2021, the Airport generated over $9 million in revenues and handled over 86,000 aircraft operations.

Martin is the base for more than 250 aircraft.

There are four flight schools offering training in both fixed and rotary wings at Martin State Airport.

County airports listed are those that either are maintained or operated by county government. 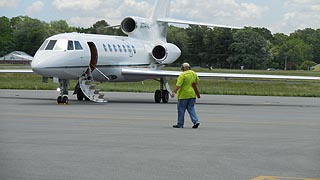 Municipal airports listed are those that either are maintained or operated by municipal government.