Only the reverse of the Great Seal (shown to the left) is used officially. In 1959, however, the obverse was described in statute and has been considered part of the Seal (Chapter 396, Acts of 1959). Often, it adorns public buildings.

The first Great Seal was brought over during the early days of the Maryland colony, but was stolen by Richard Ingle during his rebellion of 1645. Cecilius Calvert, 2nd Lord Baltimore, sent a similar seal from England in 1648 for the use of the Maryland Chancellor. Except for the period of crown rule (1692-1715), that Great Seal remained in use until the end of the 18th century, the Maryland Council having authorized continued use of the provincial seal on March 31, 1777 (Constitution of 1776, sec. 36).

A new seal with republican imagery was adopted by the Governor and Council on February 5, 1794. Designed by Charles Willson Peale, the Maryland Seal of 1794 remained in use until 1817. In that year, the General Assembly adopted a single-sided Great Seal bearing an eagle holding a shield. Another seal authorized in 1854 depicted an eagle and a version of the Calvert arms (Chapter 81, Acts of 1854). 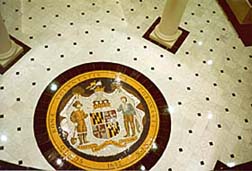