The reverse of the Great Seal of Maryland consists of an escutcheon, or shield, bearing the Calvert and Crossland arms quartered. Above is an earl's coronet and a full-faced helmet. The escutcheon is supported on one side by a farmer and on the other by a fisherman. It symbolizes Lord Baltimore's two estates: Maryland, and Avalon in Newfoundland. 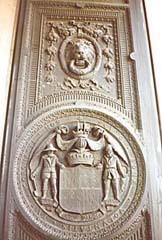 The Latin legend on the border is the last verse of Psalm 5 (from the Latin Vulgate Bible). It translates as "with favor wilt thou compass us as with a shield."

The date, 1632, refers to the year Charles I, King of England, granted the Maryland charter to Cecilius Calvert, second Lord Baltimore.