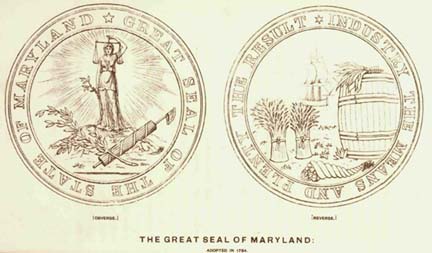 The front (obverse) of the Maryland Seal of 1794 is on the left and bears an image of a woman holding the scales of justice. Its back (reverse) is on the right, showing sheaves of wheat, a sailing ship, tobacco leaves atop a hogshead (barrel), and a cornucopia, which represent Maryland agriculture and trade. This seal was intended as a wax pendant seal (not for embossing). From 1794 to 1817, both its sides constituted the "Great Seal" until a new single-sided Great Seal was adopted in 1817.

The mace of the House of Delegates is capped in contemporary silver with the back of the Great Seal of 1794, which bears the motto: "Industry the Means, Plenty the Result".

Maryland at a Glance