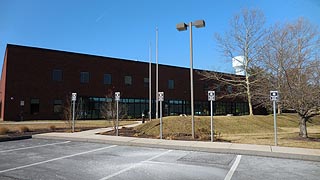 The College is composed of 538 electors with each state having a minimum of three electors: two for the pair of senators (100), and one for each representative (435). In addition, the District of Columbia has been allotted three electors since 1961 (U.S. Constitution, Amendment 23). To become president, 270 electoral votes are required.

In Maryland, political parties (or independent candidates) submit to the State's chief election official a list of individuals to serve as electors, who are pledged to their candidate for President and equal in number to the State's electoral vote. The major parties usually select these individuals at their State party convention while third parties and independent candidates merely designate theirs.

Electors are chosen every four years.

Each State shall appoint, in such Manner as the Legislature thereof may direct, a Number of Electors, equal to the whole Number of Senators and Representatives to which the State may be entitled in the Congress: but no Senator or Representative, or Person holding an Office of Trust or Profit under the United States, shall be appointed an Elector (U.S. Constitution, Art. II, sec.1).

Their election takes place on the Tuesday following the first Monday in November in years divisible by four, next scheduled for November 3, 2020 (3 U.S. Code, Chapter 1).

Convening on the first Monday after the second Wednesday in December (December 14, 2020), each state's electors meet as a body in their respective state capitals, There, they cast their electoral votes for President and Vice-President. The electoral votes then are sealed and transmitted from each state to the U.S. Senate President who, on a designated date, opens and reads them before both houses of Congress. Federal law requires that the U.S. Senate President, the Archivist of the United States, and other designated federal and state officials must have the electoral votes in hand by the end of December (December 31, 2020). To count the electoral votes, Congress meets in joint session the following January (January 7, 2021).

Origin. The Electoral College was devised in Philadelphia by the Constitutional Convention of 1787. The Convention convened to consider amending the Articles of Confederation which originally had united the states during the American Revolution. Almost immediately after assembling, the delegates decided to scrap the Articles of Confederation and write an entirely new framework of government.

Earlier, Maryland had provided for an electoral college to choose its State senators (Constitution of 1776, sec. 14). According to A Review of the Meetings of Presidential Electors in Maryland, 1789-1980, ". . . it is reasonable to believe that the electoral college plan finally adopted by the Founding Fathers was patterned, at least in part, after the Maryland system of electing state senators. Having been in operation for eleven years at the time of the Federal Constitutional Convention in 1787, the delegates to those deliberations had an impressive structure to study and use as a model." (p. ix)

HOW THE ELECTORAL COLLEGE WORKS IN MARYLAND. 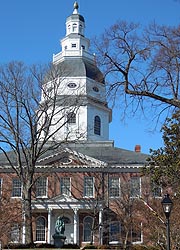 Based on the Constitutional provision that a state's electors equal its number of senators (two) plus its number of representatives (eight), Maryland has ten electors (U.S. Constitution, Art. II, sec. 1). The electoral process by which they function is set forth in Maryland law (Code Election Law Article, secs. 8-503 through 8-505).

No later than the day before the general election, the presiding officers of the state convention of each political party recognized by the State Board of Elections must certify the names of ten people to become electors should the party's candidate win a plurality of votes in Maryland. Although the names of these individuals do not appear on the ballot, votes for a political party's candidates for president and vice-president are counted as votes for the party's individual electors (Code Election Law Article, sec. 8-503). Candidates for president and vice-president who receives a plurality of the votes cast in Maryland receive all of the electoral votes. In other words, Maryland law provides for a "winner take all" system (Code Election Law Article, sec. 8-505).

Since January 7, 1789, Maryland's qualified voters have chosen electors. Originally, electors' names appeared on the ballot, but with the 1940 election the names of electors were removed and, in their stead, the names of individual candidates for office remained (Chapter 232, Acts of 1937).

The U.S. Constitution requires that ". . . no Senator or Representative, or Person holding an Office of Trust or Profit under the United States, shall be appointed an Elector" (U.S. Constitution, Art. II, sec. 1). With that one exception, no specific rules define the method of choosing electors. Selection is left up to the political parties which name their electors at state conventions. Some political parties choose one person residing in each of the eight congressional districts as an elector, and two at large.

State law requires the Maryland electors to meet at the State House in Annapolis. On December 14, 2020, they convened there (for the 59th time since 1789) to vote for the president and vice-president of the United States. Prior to meeting, the Governor prepares a "certificate of ascertainment", listing the names of the electors appointed and the number of votes received by each. The certificate also names all other candidates for elector and the number of votes each received. The certificate is signed by the Governor and carries the State seal. The Governor then makes seven original certificates of ascertainment. One original along with two authenticated copies are sent to the Archivist of the United States. The remaining copies are delivered to Maryland's electors prior to their meeting.

Once assembled, the Maryland electors participate in an oral, roll-call vote for president and another for vice-president. After voting, they sign seven original "certificates of vote", annexing a certificate of ascertainment to each. One of the seven pairs of certificates is sent to the U.S. Senate President; two go to the Archivist of the United States; two to Maryland's Secretary of State (one to be held subject to the order of the U.S. Senate President, and the other to be made part of the public records and open to public inspection [3 U.S. Code, Chapter 1, sec. 11]); and one to the Chief Judge of the U.S. District Court for the District of Maryland. The final copy is retained by the State Board of Elections. When these duties are completed, the responsibilities of the electors are fulfilled.

For more information on the Electoral College, see: