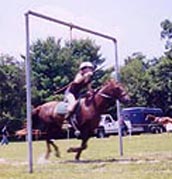 Today, jousting competitions are held from May through October in Maryland. 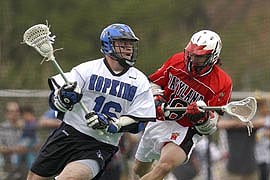 Known as the oldest sport in North America, lacrosse was played by native American tribes probably for centuries before the first account of it was written in 1636 by a French Jesuit missionary in Canada. Among native Americans, lacrosse was played by tribes throughout the Great Lakes region, and in what is now the southeastern United States, and all along the East Coast, a range which encompasses Maryland.

Since 1995, lacrosse has grown rapidly as a club sport and at middle- and high-school levels in Maryland.

Lacrosse is a fast-paced game played on a field in which the ten players on each team attempt to get a small ball into their opponent's goal while keeping it out of their own goal. A team consists of a goalie, three attackers, three midfielders, and three defenders. A long-handled stick with a net pocket on the end is used to throw, catch, and scoop the ball. From the stick, the game derives its name. To early French Canadians, the stick resembled a bishop's crosier, la Crosse.

In the United States, lacrosse became popular on college campuses in the late 1800s, beginning with New York University in 1877. The University of Maryland fielded its first team in 1910. In 1926, the first women's lacrosse team in the country was established at the Bryn Mawr School in Baltimore. Lacrosse made its Olympic debut in 1904, with The Johns Hopkins University team representing the United States at the summer games in 1928 and 1932. That school has remained a lacrosse power-house, ranked number one in the postseason coaches poll in 2002, 2003, and 2004. The Johns Hopkins University's Blue Jays defeated Duke University's Blue Devils to win the National Collegiate Athletic Association (NCAA) Division I Men's Lacrosse championship on May 30, 2005 and May 28, 2007. Played at M & T Bank Stadium in Baltimore, the victory gave the Blue Jays a ninth national title.

Maryland not only wins, but also hosts competitive lacrosse events. From June 23 to July 2, 2005, Annapolis, Maryland, hosted the World Cup, International Federation of Women's Lacrosse Associations. The National Collegiate Athletic Association (NCAA) men's lacrosse championship match was played at M&T Bank Stadium, Baltimore, on May 28, 2011 and returned May 24-26, 2014. The USA Lacrosse National Tournament was held in Bel Air May 28-29, 2022, while the Premier Lacrosse League played four games at Johns Hopkins' Homewood Field in Baltimore June 24-25, 2022. In addition, the World Lacrosse Women's World Championship was held in Towson from June 29 to July 9, 2022.

. Open to US Lacrosse member coaches, officials, and administrators, the Convention offers field demonstrations, and educational clinics and sessions.

Maryland is home to the Lacrosse National Hall of Fame and Museum. Formerly located at The Johns Hopkins University in Baltimore City, the Museum moved to Sparks (Baltimore County) in 2016.