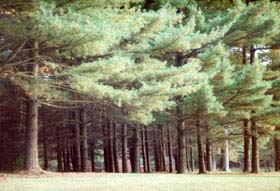 Over 160 native or naturalized tree species can be found in Maryland. Oak and hickory are the dominant hardwoods, making up 60 percent of forested areas. Loblolly pine, the predominant forest tree on the Eastern Shore, is the most prevalent softwood, composing 15% of forests.

In 2021, forests constituted 2.43 million acres (39%) of Maryland's land surface. Some 1.87 million acres of forests, 76% of the total, belong to private landowners, while 24% belong to the public, including the State. About 41% of public forests are preserved from harvesting, about 10% of the overall forestland in Maryland. Mature forests make up 78% of Maryland's forested lands, with 40% over 80 years old. 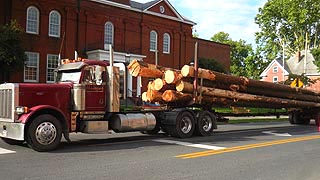 The fourth largest industry in the State, the forest industry has a value of about $3.5 billion. In western Maryland, the industry is the largest employer in Allegany and Garrett counties and on the Eastern Shore, it is the second largest. In 2021, the industry generated 4,714 forestry-related jobs, with a payroll of $318.7 million. 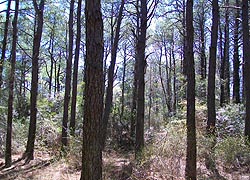 Maryland's Reforestation Law requires that any forests that are cleared for State-funded highway construction projects must be replaced (Code Natural Resources Article, secs. 5-101 through 5-103). Enacted in 1991, the Maryland Forest Conservation Act ensures that forests, particularly those near water, including wetlands, on steep terrain, and within large wildlife areas are identified and protected during land development (Chapter 255, Acts of 1991; Code Natural Resources Article, secs. 5-1601 through 5-1613).

Near the Chesapeake Bay and near Maryland forests, sea levels are rising at double the world's average rate. Along with climate change, forests on Maryland's Lower Eastern Shore increasingly are affected by saltwater intrusion, or the movement of saltwater towards land that occurs when too much freshwater is removed from aquifers, and the settling of the land itself. In July 2020, saltwater intrusion had affected 50,365 forest acres across the Eastern Shore, up dramatically from 10,174 acres in 2019. The General Assembly ordered the Department of Planning, along with the Departments of Agriculture, Environment, and Natural Resources, to devise a plan to adapt to saltwater intrusion and update it every five years (Chapter 628, Acts of 2018).