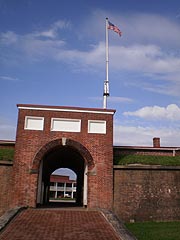 The second war between England and America is commonly known as the War of 1812, even though it lasted almost three years.

PRELUDE TO WAR
Tensions between England and the United States had been building for years, particularly since the start of the Napoleonic War in 1803. Contending with England, Napoleon, in 1803, sold to the United States all French territory west of the Mississippi River. Termed the Louisiana Purchase, the sale helped subsidize the French war effort, and more than doubled the size of the United States. The purchase agreement also gave the United States some lands disputed with England along the Canadian border.

At war with France, England faced a growing problem of desertions, particularly from the Royal Navy. To recover deserters, England implemented a policy of boarding vessels encountered, and impressing any deserters found aboard. Frequently, the British boarded American trade ships and seized crew members, including American citizens falsely identified as former British sailors.

In an effort to stop the British and French seizure of American vessels, the U.S. Congress, beginning in 1807, enacted a series of embargos, port closures, and trade restrictions, including the Embargo Act of 1807, the Non-Intercourse Act of 1809, and Macon’s Bills. These acts met with little acknowledgment from either England or France, while both nations continued to seize American ships and crew. With native uprisings in the West attributed to British instigation, and England's presence in the colony of Canada, British policy and actions grew intolerable to the Americans.

Chesapeake-Leopard Affair. On June 22, 1807, while sailing off the coast of Norfolk, Virginia, the American frigate USS Chesapeake, commanded by Commodore James Barron, was intercepted by the British warship HMS Leopard, under Captain Salusbury Pryce Humphreys. The British requested permission to search the Chesapeake for Royal Navy deserters, but Barron refused. The Leopard thereupon fired several broadsides (the coordinated firing of all cannons on one side of a ship), killing three sailors and wounding eighteen others, including the captain. The Chesapeake surrendered and the British boarded and seized four men, three of whom were Americans. Taken to Halifax, Nova Scotia, the four sailors were tried and convicted for desertion. The three Americans, Daniel Martin, John Strachan, and William Ware, were imprisoned; however, the British sailor, Jenkin Ratford, also found guilty of mutiny and contempt, was hanged on the H.M.S. Halifax, his former ship.

The U.S. Congress demanded reparations for the seizure of its seamen, as well as a cessation of impressment, and British ships were expelled from American waters. Despite mounting public pressure to declare war on Britain, Congress instead passed the Embargo Act of 1807 that December, which prohibited American ships from trading with foreign countries. An economic disaster for America, the Act was repealed in March 1809.

In 1808, Commodore Barron was tried and convicted of neglect of duty in not having his ship ready for action. He was suspended without pay for five years. In 1811, the British government apologized for the attack on the Chesapeake, and offered reparations to the families of those men who were killed or wounded. Martin and Strachan were returned in 1812, but Ware had died during captivity.

CHRONOLOGY OF THE WAR

In the summer of 1812, President Madison met with Congress to declare war on England. The United States accused England of trade restrictions to discourage trade with France, impressment of U.S. citizens by the British Navy, and British instigation and armament of natives against American settlers. With this June declaration of war, as well as a failed American strike into Canada, July 12 to August 16, English and American hostilities and encounters became more violent and costly.

Although hampered by its ongoing war with France, England immediately began erecting fortifications and added extra garrisons along the American and Canadian border, and the Great Lakes. The Americans, in turn, failed in their second attempt to invade Canada, October 10-13. This defeat, along with the British capture of Detroit, left American forces at a disadvantage at the beginning of 1813.

In early spring, the war with Britain became a reality for Maryland residents. Beginning the year with a strong hold on the Canadian border, British forces were mobilized towards the Chesapeake Bay.

For years, ships launched from Baltimore Harbor had harried the British fleet, and the British had labeled Baltimore as a den of privateers and pirates. In an effort to quell such assaults, as well as hamper transport of goods or troops by sea, the British Navy blockaded much of the eastern seaboard. In March, the British frigates and other warships sailed up the Chesapeake. These ships allowed the British to land troops quickly and easily on either the eastern or western shores of Maryland. Within a month of establishing the blockade, British troops launched sorties inland.

As the Chesapeake Campaign of 1813 allowed no clear victories, American forces fared better on the frontier. While land forces gained little ground, American naval vessels won substantial victories on the Great Lakes. With Lake Erie under American control, British and native forces on the western front were unable to receive supplies or reinforcements. While the British were committed in the West, the American Army launched an attack on the Canadian capital of York (now Toronto). A clear victory for the Americans, the army looted and burned a number of key buildings, including York’s Parliament buildings.

Chesapeake-Shannon Battle. Since the war began, the American Navy had defeated the Royal Navy in several major battles, but in 1813, the British, determined to reassert their superiority on the seas, reinforced their fleet and expanded their blockade of American ports, as well as the Chesapeake Bay. Several U.S. Navy warships attempted to break out of the blockade from various ports along the East Coast, but were unsuccessful. On June 1, 1813, the USS Chesapeake, famous for the Chesapeake-Leopard Affair and now under Captain James Lawrence, left Boston Harbor and engaged in battle, or a ship-to-ship duel, with the HMS Shannon, commanded by Captain Philip Broke. Captain Lawrence and a large number of the Chesapeake's officers and crew were new to the ship and untrained in its weaponry, while the Shannon's crew were highly-trained gunners, meticulously drilled by their captain. During the 15-minute battle, both ships fired multiple broadsides, but the Shannon's precisely-executed shots killed or injured many of the officers and crew, including Captain Lawrence, who, mortally wounded shortly after the battle commenced, reportedly commanded, "don't give up the ship." Severely damaged and unmaneuverable, the Chesapeake was lashed to the Shannon and the British crew, including Captain Broke, boarded the American frigate and engaged in hand-to-hand combat with its crew, who quickly surrendered. The American losses were 48 killed and 99 injured, while the British losses were 23 killed and 56 others wounded, including Captain Broke, in what became one of the deadliest single-ship battles in history. Afterwards, the Chesapeake was taken as a prize to Halifax and then put into the Royal Navy's service, where it was renamed the HMS Chesapeake. Captain Lawrence died en route to Halifax, while the surviving crew were imprisoned. Captain Broke recovered, though he never served at sea again.

May 5. Skirmish at Fredericktown, Cecil County.

May 5-6. Skirmish at and burning of Georgetown, Kent County.

The campaigns of 1814 were equally victory and defeat. As American forces gained further ground in the North and West, British forces in greater numbers redoubled efforts in the Chesapeake Bay for England, with the defeat of Napoleon in Europe, was able to send an additional 15,000 troops to America. 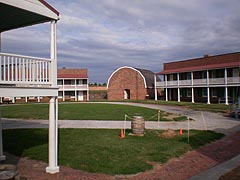 In order to distract American forces in Canada and to retaliate for the destruction of York, the Canadian capital, the British launched two major assaults against Washington, DC, and Baltimore.

Yet, while British forces were able to seize and burn Washington, DC, with little difficulty, the secondary assault on Baltimore failed to gain even modest success. Though British forces bombarded the city from land and sea, Baltimore repelled the attack for two days until the British withdrew.

Aug. 24-25. British forces entered Washington, DC. and burned public buildings, including the White House, the U. S. Capitol, and the Library of Congress. 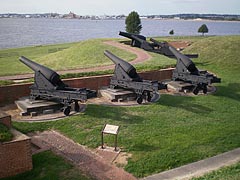 Sept. 15. British forces retreated from Baltimore, ending the Battle and the Chesapeake Campaign.

Despite the signing of the Treaty of Ghent on December 24, 1814, the War continued. Due to the slow relay of communication at the time, fighting persisted even after news of the signing reached the United States.

The most famous post-Treaty battle was the Battle of New Orleans, but many more were fought from Maine to Alabama, including the Battle of the Ice Mound in Dorchester County, Maryland. There, American militia crossed the frozen Chesapeake Bay to attack British barges iced in at Taylor's Island off the Eastern Shore.

On February 16, Congress ratified the Treaty of Ghent, officially ending the War. Though a number of native tribes kept fighting in the West, the British thereafter withdrew from the United States without further conflict.

Although the War of 1812 lasted for nearly three years, it accomplished little for either nation. Reasons given for the declaration of war had been effects of the Napoleonic Wars, and with Napoleon exiled in April 1814, the two primary American war aims were accomplished despite the ongoing war. England had ended the practice of impressment, and repealed the Orders in Council that effectively had closed Europe to American merchants. As the campaigns of 1814 ended, both sides possessed lands claimed by the other, and neither nation could wage a fully successful land campaign. Consequently, the Treaty of Ghent was written to create status quo ante bellum, returning conditions to a prewar state.

Comprised of eleven articles, the Treaty of Ghent spelled out the cessation of hostilities, the dispersment of the armies, and the return of property and personnel seized during the war. It defined the borders as those agreed upon by the Treaty of Paris (1783). The Treaty of Ghent also provided that disputed land not covered in the treaty of 1783 would be resolved by joint committees established at a later date (committees authorized by the Treaty never were appointed, nor was the issue addressed again until the London Convention of 1818). In signing the Treaty, both sides agreed to cease the encouragement of native uprisings against the other, and "use their best endeavours to accomplish" the abolition of slavery.

England refused to address the issue of impressment, but neither did it pursue its stated war aims, which included redrawing the American-Canadian boundaries. England had sought territory in Maine, New York, and along the Louisianna Purchase northern border. Previously England had also demanded that a neutral zone be created between the two nations and be given to the native population as payment for their part in the War.

By the end of 1815, England and America both had returned land and prisoners taken during the War, and reestablished trade. Though impressment had not been covered by the Treaty of Ghent, and England legally could resume the practice of impressment, England never again organized press gangs, or boarded ships to reclaim sailors. Slavery, though addressed by the Treaty, had been abolished in England in 1774, and by its colonies in 1807. As a nation, the United States would not abolish slavery until 1865, when the 13th Amendment to the U.S. Constitution was ratified.

As Defenders Day, Maryland has commemorated the Battle of North Point and writing of the national anthem since 1908. Celebrated each September 12, Defenders Day is a State holiday with fireworks, reenactors, and historic presentations.