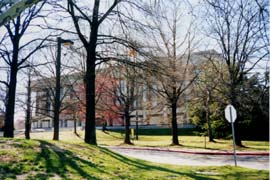 Except as otherwise provided by law, the Court of Special Appeals has exclusive initial appellate jurisdiction over any reviewable judgment, decree, order, or other action of a circuit court or an orphans' court, except for appeals in criminal cases in which the death penalty is imposed. Generally, it hears cases appealed from the circuit courts (Code Courts and Judicial Proceedings Article, sec. 12-308). The Court also considers applications for leave to appeal in such areas as post-conviction, habeas corpus matters involving denial of or excessive bail, probation revocations, convictions based upon guilty pleas, and inmate grievances (Code Courts and Judicial Proceedings Article, secs. 1-401 through 1-403).

Judges of the Court of Special Appeals are empowered to, and generally do, sit in panels of three. A hearing or rehearing of a case before the whole Court (when all 15 judges sit together, en banc) may be ordered in any case by a majority of the Court's incumbent judges.

ALTERNATIVE DISPUTE RESOLUTION DIVISION
The Alternative Dispute Resolution Division formed in February 2010 under the Court of Special Appeals as the Mediation Office. The Office was established to oversee the Civil Mediation Pilot Program created by an administrative order from the Chief Judge of the Court of Special Appeals. In February 2012, the Office reformed as the Alternative Dispute Resolution Division.

The Division oversees the Court's Mediation and Prehearing Conference programs.

Every civil case filed with the Court of Special Appeals is reviewed to determine whether a mediation or prehearing conference would be beneficial. In Mediation, parties work with one or more impartial mediators who assist the parties in reaching their own voluntary agreement for complete or partial resolution of the issues on appeal, in addition to any other issues relevant to the underlying dispute between the parties. In Prehearing Conference, parties work with an incumbent or retired Court of Special Appeals judge to discuss the contents of the record and/or record extract, pending Prehearing motions, scheduling matters related to the appeal, consolidation of appeals, and any other issue aimed at streamlining the appellate process. Both processes offer litigants a chance to resolve their differences before engaging in the potentially lengthy and expensive appeal process, and assist the Court in conserving judicial resources by reducing the Court's caseload.