Historic St. Mary's City, the site of the fourth permanent settlement in British North America, was Maryland's first settlement in 1634 and for sixty-one years (until 1695) its colonial capital. 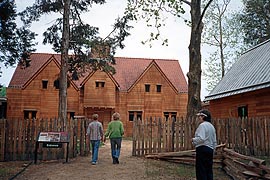 Historical and cultural properties necessary for the proper use and administration of Historic St. Mary's City may be acquired by the Commission. In addition, the Commission may accept private gifts, as well as federal, State and local government grants.

Seventeen members constitute the Commission. Thirteen are appointed to four-year terms by the Governor with Senate advice and consent. Of four ex officio members, two vote and two are nonvoting members. The Commission names the Executive Director (Code Education Article, secs. 24-501 through 24-525).