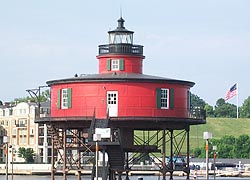 Lighthouses are found in Maryland's rivers and the Chesapeake Bay.

Lighthouses are structures built on or near shore that produce a beam of light, marking coastlines, underwater dangers, or harbor entrances, as a navigational aid for sailors.

Early lighthouses were simple and inexpensive. Some were built as integral lighthouses (houses with enclosed lights on top), while others were towers from which a light shone. Later, lighthouses tended to be more elaborate and therefore more costly to build.

Screw-pile lighthouses were structures perched on iron piles or stilts that were screwed into the sea floor, while caisson lighthouses displayed towers built atop round, hollow waterproof shells that were sunk to the bottom and filled with sand or concrete. 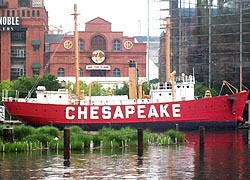 Lightships were ships that served as lighthouses. They had a light mounted on a tall mast. Later vessels usually were painted bright red with the station name in white letters. Multi-functional, they could be stationed in both shallow and deep waters, and could be moved according to need. 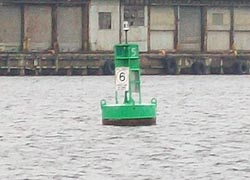 Buoys, like lighthouses, serve as aids to navigation (ATON) for mariners. Usually anchored in place, buoys are floating iron markers that indicate sea lanes, mooring locations, speed limits, as well as underwater hazards, such as rocks, shoals, and wrecks. Using the Lateral System, buoys are arranged by color, shape, number, and whether they have a light.

Nun buoys are red, cylindrical, and have even numbers. They mark the starboard (right) side of the channel for vessels returning to land (thus the "3R" rule: "red, right, returning").

Can buoys are green, can-shaped, and have odd numbers. They indicate the port (left) side of the channel for incoming vessels.

Lighted buoys usually are found in deeper water, and their body and light color vary depending on their location. When they are green (including the light), they perform the same duties as can buoys, marking the port side of a channel for incoming vessels. When red, they mark the starboard side, like nun buoys. If buoys are red and green, the top color (with matching light, if present) indicates the preferred channel, and they may have letters. 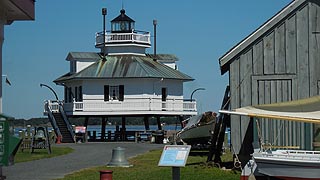 Safe Water Marks indicate navigable water all around. They are red and white and may have a white light and sound device, as well as letters.

Isolated Danger Marks are anchored on or near hidden dangers. They are black with red bands, and may have a white light and letters.

Special Aids, yellow buoys with or without yellow lights and letters, alert mariners to nets, cables, jetties, military exercise areas, and other special areas. Mooring buoys are white with a centered blue band, and they may have a white light or reflector.


First lit in 1868
Dismantled in 1924; replaced with skeleton tower on foundation
Light removed to new solar-powered structure in 2015; remnants dismantled 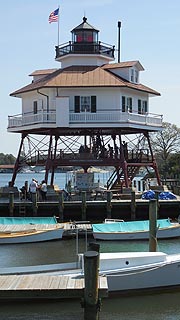 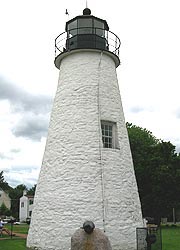 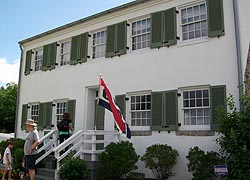 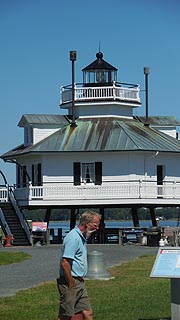