The many horse-racing events, combined with many horse farms, particularly in the central part of the State, contribute to Maryland's reputation as "horse country." For horse-racing enthusiasts, Maryland offers thoroughbred racing, harness racing, and steeplechase racing. Any racing meet within the State where racing is permitted for any stake, purse, or reward is regulated by the State Racing Commission. 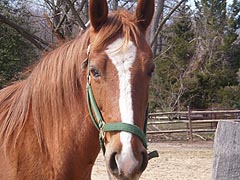 Thoroughbred Racing. Maryland has a long history of thoroughbred racing. In 1743, the Maryland Jockey Club, the nation's oldest sporting organization, formed in Annapolis to govern the sport. 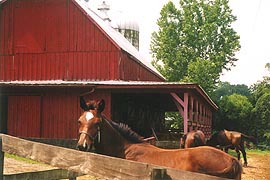 About 1747, Ogle imported the first two English thoroughbreds, Spark and Queen Mab, into Maryland. They, along with Selima, an English mare bought around 1750 by Ogle's brother-in-law, Benjamin Tasker, Jr., were used to breed horses that were faster and stronger than the local stock. Selima ran in and won two races, including one in Virigina with the largest prize at that time. An undefeated racehorse, she produced champion offspring and her bloodline continues in racehorses to this day. Due to his bloodstock, Ogle's Belair Stud Stable became one of the most important stables in the country. 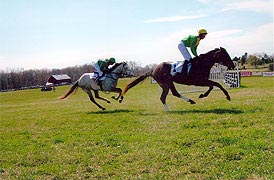 The Preakness Stakes, the second race of the Triple Crown, was first held on May 23, 1873. Held at Pimlico Race Course in Baltimore on the third Saturday in May, the Preakness Stakes follows two weeks after the Kentucky Derby and runs three weeks before the Belmont Stakes. The Preakness is next scheduled for May 2023.

Throughout the year, thoroughbred races also are held at Timonium Race Track (Baltimore County) and Laurel Park (Prince George's County), including the Maryland Million, run each October since 1985, and next scheduled for Oct. 22, 2022. 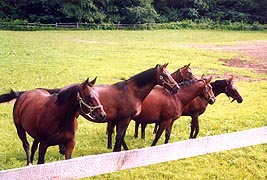 In racing history, Maryland has been home to many champion Thoroughbreds, including three of the twelve Triple Crown winners. Man o' War, from Glen Riddle Farm in Berlin, is considered one of the best Thoroughbred race horses in history, having won 20 of 21 races, including the 1920 Preakness Stakes and Belmont Stakes, and setting three world, two American, and seven track records. Gallant Fox, from Belair Stud Stable in Collington, won the Triple Crown in 1930 and his son, Omaha, won the Triple Crown in 1935, marking the first time that a father and son both won the title. War Admiral, son of Man o' War, won the fourth Triple Crown in 1937 and raced Seabiscuit, grandson of Man o' War, in the Pimlico Special, known as the "Match Race of the Century," on November 1, 1938.

Eventing. Originating from cavalry tests that demonstrated riding skills, Eventing is an equestrian triathlon that includes three phases of competition: Dressage, Cross-Country and Show Jumping. Men and women compete against each other in the phases, which can take place over several days, depending on the course. The highest level of Eventing competition is the prestigious 5-Star Concours Complet International (CCI5*-L), which includes the Olympics and FEI (Fédération Equestre Internationale) World Equestrian Games, both of which are held every four years.

The next Maryland 5 Star will be held Oct. 13-16, 2022, at the Fair Hill Special Event Zone in Elkton (Cecil County). The four-day event will be one of only two 5-Star horse trial events held in the U.S., and only the seventh held worldwide. 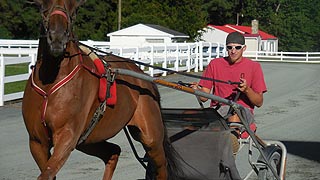 Harness Racing. A form of horse racing, harness racing is designed for trotting horses to compete against each other while pulling a two-wheeled cart, called a sulky, and a driver.

Harness racing takes place at two Maryland racetracks. In Prince George's County, Rosecroft Raceway, the "Raceway near the Beltway", opened in May 1947 at Fort Washington. In Worcester County, Ocean Downs opened in July 1949 near Ocean City at Berlin.

Steeplechase Racing. In Maryland, the steeplechase racing season is spring. It runs from March through May with the concluding race in September. Eleven of the races make up the Maryland Governor's Cup Series. They are run on courses in large, wooded and hilly fields, ranging in length from two to four miles. Depending on the race, riders and horses, jump over man-made hedges or timber fences of varying heights.

My Lady's Manor Steeplechase in Monkton is held on the second or third Saturday in April (next scheduled for April 2023).

Maryland Grand National Steeplechase in Baltimore County is held on the second to last Saturday in April (next scheduled for April 22, 2023).

Maryland Hunt Cup (one of the oldest steeplechase races in the United States) was first run in 1894. On the last Saturday each April, it is raced over post and rail fences up to five feet tall. The next race, the 121st running, will be April 29, 2023.

Howard County Cup Races are held at Pleasant Prospect Farm in Brookeville, and are next scheduled for May 2023.

Potomac Hunt Races offer steeplechase just west of Potomac, and will next be run in May 2023.

Based at Fair Hill near Elkton in Cecil County, the National Steeplechase Association is the official regulatory body for the sport in the United States.