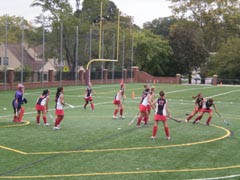 Records of hockey games date back to ancient Egypt, the Aztecs, and Romans. Although ice hockey is perhaps the best known form of hockey, field hockey is no less a part of Maryland's sport scene. With less equipment, and the ability to play on existing fields, field hockey is the prefered version of the sport for many public schools. Some colleges have both a field and ice hockey team, allowing students to play year-round.

Field hockey was developed in Europe, with the word hockey coming from the French 'hocquet', meaning 'shepherd's crook'.

Classified as a fall sport by the Maryland Public Secondary Schools Athletic Association (MPSSAA), field hockey is a popular alternative to traditional ice hockey. Requiring less equipment or special facilities, field hockey commonly is played outdoors, and is offered by many public schools and colleges. Leagues play from September through November.

The MPSSAA oversees teams in the public school system, organizes tournaments, and provides for a uniform set of rules. School districts that maintain teams have been organized into enrollment-based classifications.

Other alternatives for those wishing to play field hockey include the Baltimore Field Hockey Association, or programs and events offered by USA Field Hockey, as well as in clubs, including the Hymax Field Hockey Club in Baltimore.

NATIONAL COLLEGIATE ATHLETIC ASSOCIATION (NCAA)
In Maryland, two teams have repeatedly won the NCAA field hockey championships in their divisions. The University of Maryland maintains a Division I team within the Big Ten Conference, while Salisbury University has a Division III team in the South Region. In 2009, the Maryland Women's field hockey team had the best record in Division I, finishing the season 23-1. Though unable to claim the championship in 2009, University of Maryland has won the NCAA Division I Championship eight times (1987, 1993, 1999, 2005, 2006, 2008, 2010-11). Salisbury University has won the NCAA Division III Championship five times (1986, 2003, 2004, 2005, 2009), finishing the 2009 season with a record of 20-1.

NATIONAL FIELD HOCKEY LEAGUE (NFHL)
The National Field Hockey League is a nationwide association that organizes games and tournaments among college student field hockey teams. Each team is ranked, based on the previous fall season's scores, as either an "A" team, one with an average of 1.4 points per game, or a "B" team, one with less than 1.4 average game points, a team that played four or less games, or a new team.

USA FIELD HOCKEY (Olympics)
In 1908, field hockey was introduced to the summer Olympic games at London, with women's competition added in 1980. Created in 1993, when the Field Hockey Association of America and the United States Field Hockey Association merged, USA Field Hockey maintains teams to represent the nation at international competitions (including the Olympics), provides programs and events designed to further awareness of the sport, and creates opportunities for aspiring players. For the 2010 season, the Women's National Team had four players from the University of Maryland. Unlike ice hockey, there is no equivelent field event for the Paralympic games.

The first ice hockey game on record was played in Canada.

Defined as “a game played on an ice rink in which two opposing teams of skaters, using curved sticks, try to drive a small disc, ball or block into or through the opposite goals”, hockey originated in North America, and was first played in the mid-nineteenth century. A winter sport at the core, hockey seemed out of place in Maryland. In spite of a more temperate climate, Maryland and its residents quickly warmed up to the frosty sport. In 1894, Baltimore hosted the first game played on artificial ice in the United States. The game was played at the opening of the North Avenue Rink between The John Hopkins University and the Baltimore Athletic Club

Though the North Avenue Rink in Baltimore no longer serves as an ice rink, Maryland continues to leave its mark on hockey. Amateur hockey teams are found throughout the State, and participate in numerous leagues, including the Chesapeake Bay Hockey League (CBHL), Mid-Atlantic Women’s Hockey League (MAWHL), and the American Special Hockey Association. While most leagues play from October through December, the NHL pre-season begins in September and runs to the Stanley Cup tournement, which is held in June.

Although Maryland is not currently home to an AHL team, Baltimore has possessed three seperate teams since 1962. Baltimore teams and players have claimed a number of AHL awards and records. Most players for Baltimore's AHL teams were career hockey players who played for multiple leagues, including those in the NHL. One such player is Steve Carlson (Baltimore Skipjacks, 1983-1987), perhaps best known as Steve Hanson, one of the "Hanson Brothers" from the 1977 film Slap Shot.

ATLANTIC COAST HOCKEY LEAGUE
The Atlantic Coast Hockey League was an organization of minor league teams that lasted from 1981 until 1987. The Baltimore Skipjacks played in the League from 1981 to 1982 before moving to the American Hockey League.

NATIONAL HOCKEY LEAGUE (NHL)
The National Hockey League is the pinnacle of the game. With the Stanley Cup awarded to the League's champion team, the Cup is the ultimate goal for players around the world. The League consists of thirty teams from Canada and the United States. Founded as an NHL expansion team in Landover, Maryland, the Washington Capitals played over twenty seasons (1974-97) in Maryland, before moving to downtown Washington, DC for the 1997-98 season.

TRI-STATE HOCKEY LEAGUE
The Tri-State Hockey League operated from 1932 to 1933, during which time the Baltimore Orioles played in the League.

USA HOCKEY (Olympics)
Men's hockey was added to the Olympic games in 1920, with a women's tournament added in 1998. America has sent teams of its best and brightest every four years since, and a number of these athletes have been from Maryland. As a former goaltender for the Baltimore Skipjacks (AHL), Scott Gordon played on the 1992 Olympic Team, and was selected as an assistant coach for the men's team at the 2010 Vancouver Games.

Though it is not televised, and receives little fanfare outside its community, the Paralympic games are held at the same time, city, and venue as the Olympic games. Since the 1998 Games in Nagano, Team USA has sent a fifteen-man sled hockey team to the winter Olympics.

WORLD HOCKEY ASSOCIATION
The World Hockey Association was a professional organization that lasted from 1972 until 1979. The Baltimore Bandits played in the League during the 1975 season.

Most Points - Career: Willie Marshall*
*(career in NHL as well as AHL, with Baltimore Clippers, 1966-71)


Most Times Leading the League in Assists - Career: Art Stratton*
*(career in NHL as well as AHL, with Baltimore Clippers, 1973-74)


Most Games Played - Career: Willie Marshall*
*(career in NHL as well as AHL, with Baltimore Clippers, 1966-71)


Most Games Played by a Goaltender - Career: Marcel Paille*
*(career in NHL as well as AHL, with Baltimore Clippers, 1962-63)

JOHN B. SOLLENBERGER TROPHY (most points during regular season)