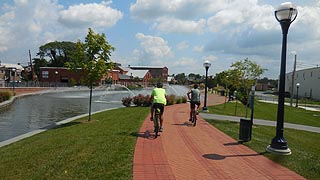 A major international cycling race, the Maryland Cycling Classic, will take place in September 2022. It is likely to start and end in Baltimore and carry a 110- to 125-mile race out into Baltimore County.

Bicycle riding in Maryland gained publicity in 1989, when the first Cycle Across Maryland was ridden. The event was held annually through June 2008. In 2005 began the Tour du Port, raced in Baltimore, which was last held in September 2015. 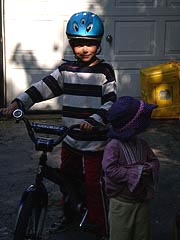 During the 2020 Olympics in Tokyo, Japan, Katie Zaferes of Hampstead (Carroll County), Maryland, won the Bronze Medal in the Women's Triathlon, which consists of cycling, running, and swimming. Zaferes won the International Triathlon Union's World Triathlon Championship in 2019.

In 2015, the League of American Bicyclists ranked Maryland tenth in the Nation’s Top 10 Bicycle Friendly States and third among Mid-Atlantic and North East States.

In Dorchester County, the annual Six Pillars Century Blackwater Tour through the Blackwater National Wildlife Refuge will next take place in May 2022. 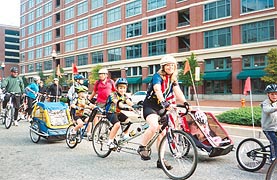 Interest in cycling is maintained by local groups, such as the Baltimore Bicycling Club and Bike Maryland. The Department of Natural Resources promotes the Maryland Trails Program. Also, some local governments have developed master plans to incorporate bicycles as a regular mode of travel within their jurisdictions.

More leisurely and sometimes festive cycling takes place on the last Friday evening of the month through the Baltimore Bike Party.