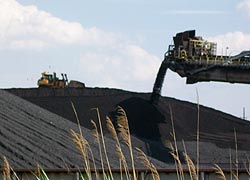 There are over 300 mines active in Maryland. According to the 2017 U.S. Economic Census, 28 firms operate mines in the State. With a combined payroll of $57 million, they employ 846 people.

Mining has been a significant part of Maryland's economy, particularly in the western counties. During the 1700s, the first mines in Maryland were dug for coal and stone. Using both the Chesapeake and Ohio Canal, and the Baltimore and Ohio Railroad to ship their product east, they helped spur transportation development in the State. In some cases, companies carved their own transportation routes, as in 1845, when the Mount Savage Coal & Iron Company completed the Mt. Savage Railroad in an effort to expedite shipping and eliminate reliance on private shipping companies.

By the mid-1900s, the mining industry began to decline in Maryland. More buildings were being constructed with brick, crushed stone, and steel. This factor, as well as a decrease in reliance on coal as a fuel source, caused many mines to became less profitable. Some tapped out; others became financial burdens on owners. Consequently, fewer mines were dug, and more shut down.

As many mines were abandoned, they posed safety and environmental risks. Plans and programs to reduce risks and improve former mine sites are overseen by the Mining Program within the Maryland Department of the Environment, and the Interstate Mining Compact Commission.

Drift Mines use horizontal passages to access mineral deposits, when the mineral is located close to the surface, and the vein forms a nearly horizontal sheet.

Shaft Mines employ vertical tunnels to reach far below the surface. They are used when a mineral forms a vertical vein, or lies too deep to reach by other means.

Slope Mines use sloping access shafts to reach mineral deposits. They afford access to minerals not found at the surface, but not deep enough to warrant shaft mining.

Surface Mines extract minerals that are just below the surface, or are too unstable for tunnelling techniques to reach. The term, surface mining, describes all procedures that remove the surface to reach mineral deposits. This method includes open-pit and strip mining, and is used to reach cinder, gravel, and sand.

COAL MINES
Coal mines have been a major source of income for Maryland since the early 1800s. Found in the western counties, these mines once exported to all states, and even Europe. By the early 1900s, coal mining here peaked with more than 450 mines in operation, producing over five million tons a year. Since then, despite a dramatic drop in the number of active mines, technological advances have allowed production of more coal per mine with less damage to the environment than ever before.

Today, within the Department of the Environment, the Coal Mining Division oversees and approves all proposed mining plans in the State. The Division also evaluates and approves plans for environmental restoration of lands containing abandoned mines. In 2020, mines in Allegany and Garrett Counties produced 1.39 million tons of coal of which 623,690 tons were drawn from surface coal or strip mining, and 771,674 tons came from deep coal mining. There were 42 permitted actions across 79 acres. Some 308 acres have been backfilled and planted. In 2020, some 9% of all energy produced in Maryland came from coal.

NONCOAL SURFACE MINES
Noncoal is defined as any mined commodity that is not coal or peat, and is referred to as nonfuel or industrial mineral. Noncoal includes aggregate (used in blacktop, concrete, & plaster), clay, and stone, as well as other minerals.

As of 2021, there were 280 noncoal mines operating in Maryland. Most are found in southern Maryland (Charles, Prince George's & St. Mary's counties). The Minerals, Oil and Gas Division within the Department of the Environment oversees these mines.

The first gold find in Maryland was reported in 1849 near Brookville in Montgomery County. Accounts also tell of Union soldiers finding gold in streams while encamped outside of Washington, DC, in 1861. Since then, 45 gold mines have been dug in the western part of the State. Although small dustings still are reported occasionally in streams, none of the mines remain active.

Once a thriving industry in the State, the mining of building stone abated as its use declined in construction. In the early 20th century, Maryland mined and exported granite, marble, quartzite, sandstone, and slate. Some of these stones even became synonamous with their location. Baltimore Gneiss, for example, was mined along Jones Falls and Gwynns Falls. As early as the 1700s, some of Baltimore's first buildings were constructed using this stone.

Mined stones are classified by two types: crushed, and dimension.

Crushed Stone is a form of aggregate, and is a base for making asphault, concrete, macadam, and tarmac. Used extensively to pave and construct roads, crushed stone produced in Maryland in 2021 totaled 28 million metric tons, valued at $377 million.

Dimension Stone is any stone that is mined, then altered to required specifications. Once used as a primary building material, dimension stone production has declined greatly over the last century. The value of dimension stone produced in Maryland was $728,000 in 2015, the last date for which data is available.