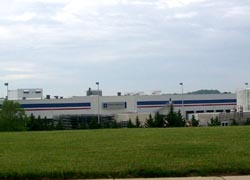 McCormick, the world's top spice manufacturer, was started in Baltimore in 1889 by Willoughby McCormick, who sold syrups and flavors door-to-door. In 2019, McCormick had $5.35 billion in sales across 150 countries and territories.

In 2017, Diageo, one of the world's largest producers of alcoholic beverages, announced its plan to build a Guinness brewery and taproom in Halethorpe, Baltimore County. The Guinness Open Gate Brewery & Barrel House opened in August 2018 and is the company's sole brewery in the United States.

Land Transport. There are five major interstate highways in Maryland, I-68, I-70, I-81, I-83, and I-95. Due to its prime location in the Mid-Atlantic and in one of the country's busiest commercial areas, products are within an overnight drive of over 30% of the national population. Maryland's efficient rail network includes two Class 1 freight rails (CSX and Norfolk Southern), four Class III short line freight rails (Canton, Bay Coast, Maryland & Delaware, & Maryland Midland), and one passenger rail (Amtrak). Of the over 1,150 miles of track throughout the State, over 70% of the network is owned by CSX, Norfolk Southern, Maryland & Delaware, and Amtrak. Carriers, such as MARC and the Wheeling & Lake Erie Railway, use trackage rights, agreements allowing a railroad to use tracks owned by another, to operate their trains. Starting in late 2021, the Howard Street Tunnel is undergoing renovations in order to move double-stack container cars.

Sea Transport. Maryland's Port of Baltimore has a 50-foot (15.2 meters) shipping channel and two 50-foot container berths, which allows it to accomodate two of the world's largest container ships at once. To offload the cargo, the Port is equipped with seven post-Panamax cranes, four super-post-Panamax cranes, and four Neo-Panamax cranes, with additional cranes to be added later in 2022. The Port contains twelve private terminals and five public terminals, including Dundalk, Fairfield, North Locust Point, Seagirt, and South Locust Point. These terminals use highways and the rail network to ship their goods across Maryland and the region.

*(in 2007, the classification for food products was redesignated as Food and beverage and tobacco products)