Eastern High School was founded in 1844, after the success of city’s first  high school, the all-male Baltimore City College, had encouraged members of the city government and community to consider facilities for girls “who may have manifested superior abilities and attained suitable acquirements in the Primary Schools.”[1] Though found to be capable of handling a level of learning beyond primary school, the teenage daughters of Baltimore were considered too delicate to handle a long commute to school. Thus, Eastern and Western High Schools were formed to serve the (white) female population to the east and west of Jones’ Falls respectively. The girls learned skills that prepared them for lives as mothers, wives, low-level employees, and teaching, though over time the curriculum became more progressive and recognized the benefits of giving girls a comparable education to the one boys could receive at City College.

Eastern’s unique culture, history, and opportunities for young women helped to enshrine it fondly in the hearts and minds of its alumnae.  When the time came in 1944 to celebrate its 100th year, it did so both with its sister school, Western High School, and by itself as its own institution. Four major events were planned, the largest being the joint centennial celebration with Western High School. The interest in the event was so great that, two days before it took place, it was reported that there was a waiting list of over 700 people who wanted tickets. Current students at the school were asked to give up their own tickets because they would be able to participate in other centennial events, while this was one of the few open to the public.[2]

On March 11, 1944, the two schools held a “gala observance”[3] at the Lyric Theater in downtown Baltimore and made the most of their combined resources. Hostesses sat in crinolines to remind people how the young ladies of 1844 would have dressed, an honor guard chosen from both schools paraded flags up the aisles, and a joint choir of 350 students from Western and Eastern High sang from the back of the stage.

Former principals and alumnae spoke, but the keynote speaker was Captain Mildred McAffee, president of Wellesley College and Director of the WAVES, the United States Naval Reserve for women.[4] In front of a crowd of 3,000 people, she spoke of the role that education played in creating patriotic, civic-minded young men and women, much like the ones that were helping the war effort then. “Their learning has become a means to the end of their citizenship and their commitment to a cause bigger than themselves.”[5] 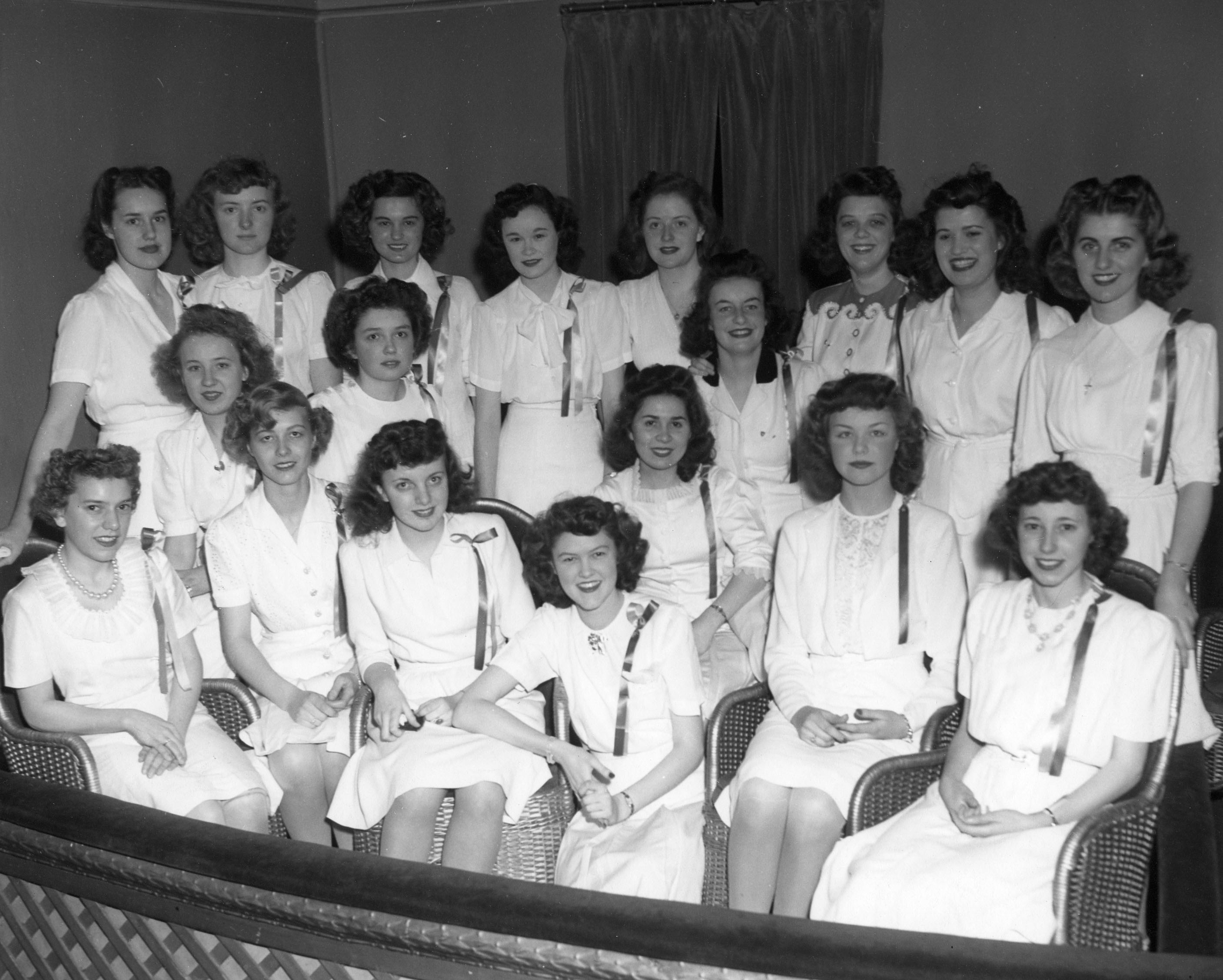 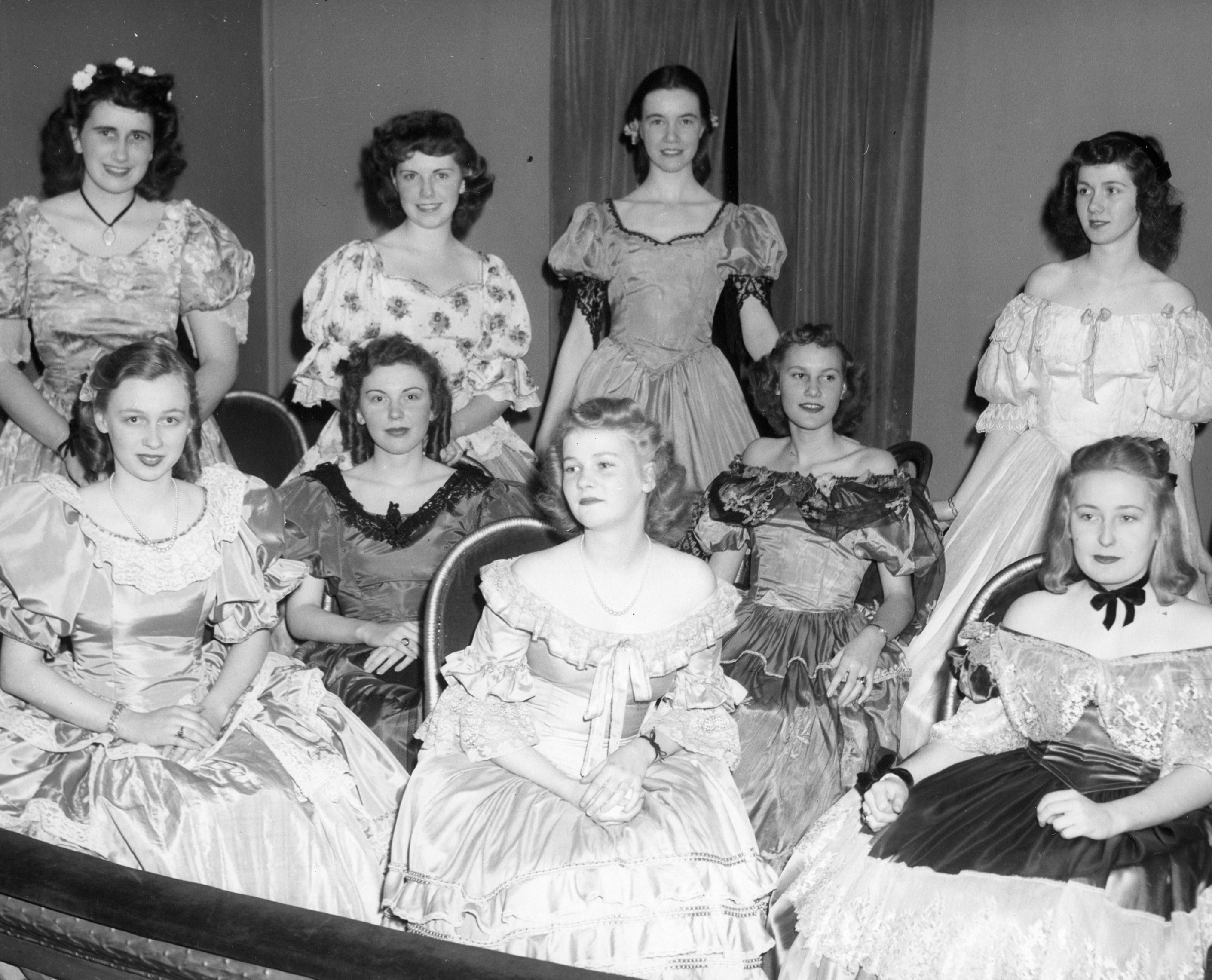 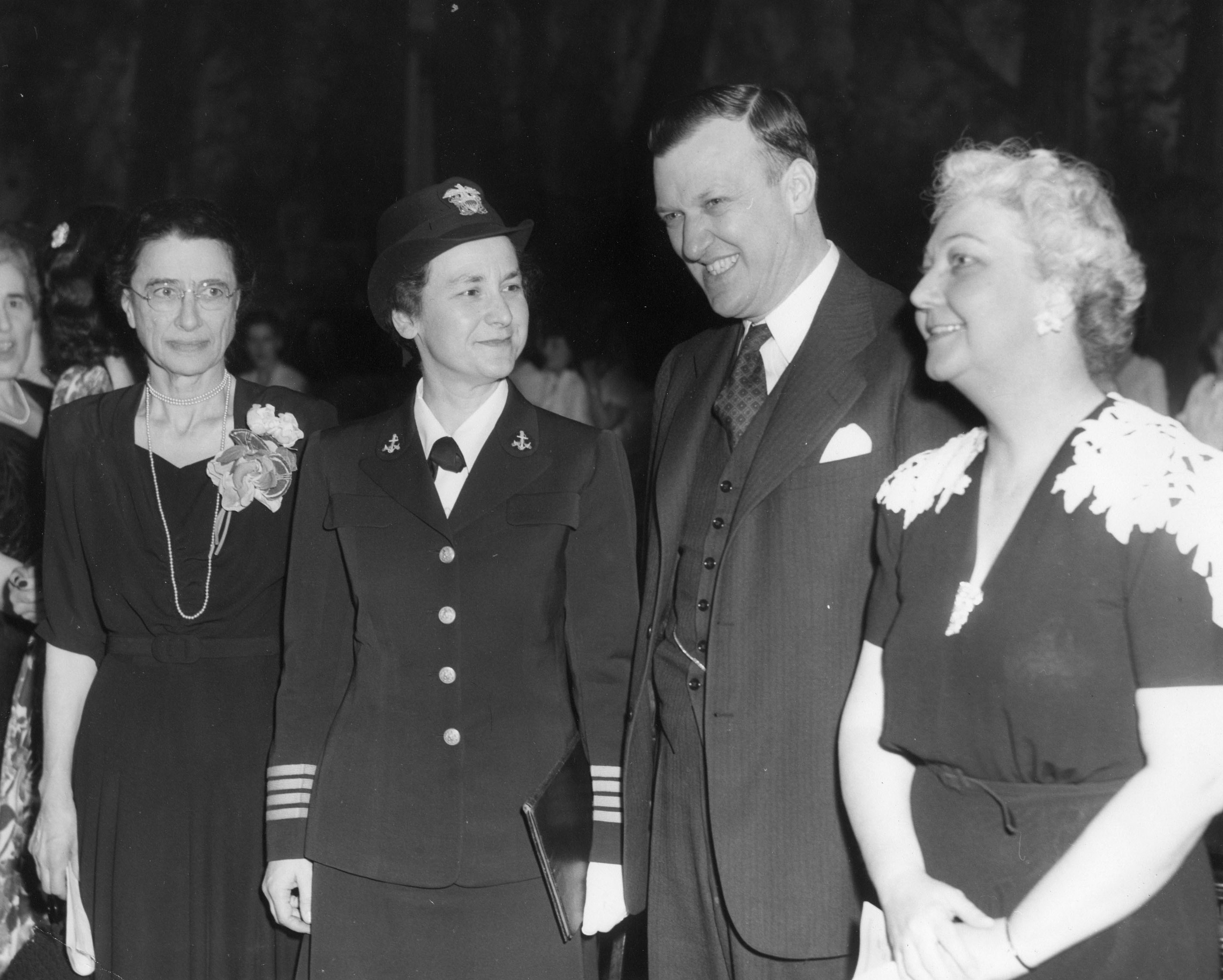 Just over a month later, a pageant was thrown at the Polytechnic Institute by the Eastern High School Alumnae Association. In addition to skits and singing, older alumnae and recent graduates modeled the gowns worn to graduation by generations of EHS students. The oldest dress was from 1880, the newest from 1942.[6] The event was attended mostly by members of the Alumnae Association, with no mention if it was open to the general public at all.

On May 5, 1944, Eastern High put on a pageant of skits that took place through the years to show the history of the school over the last 100 years. Called “The Golden Chain,” the skits were written by Mrs. Mary Moore Parrish, an English teacher at EHS, and her daughter, Mrs. Louise Parrish Anderson.[7] The two women wrote a prologue, five main parts, and a display of patriotism and flags at the end. The play proper began with women in 1844 hearing the news that the city fathers would be creating two high schools for the city’s girls, and the narrative progressed down the years until the current year. A framing narrative of a family of four alumnae talking on their porch also linked the five parts together.  Between the main parts of the play, other girls performed little skits and sang songs from years past with the audience.[8]  Tickets were sold to the general public, and music was provided by the joint orchestras of Eastern and City College. City and Eastern had been exchanging students during the school day for elective classes in art and music since 1942, and they often teamed up for special events, dances, and club meetings.[9] 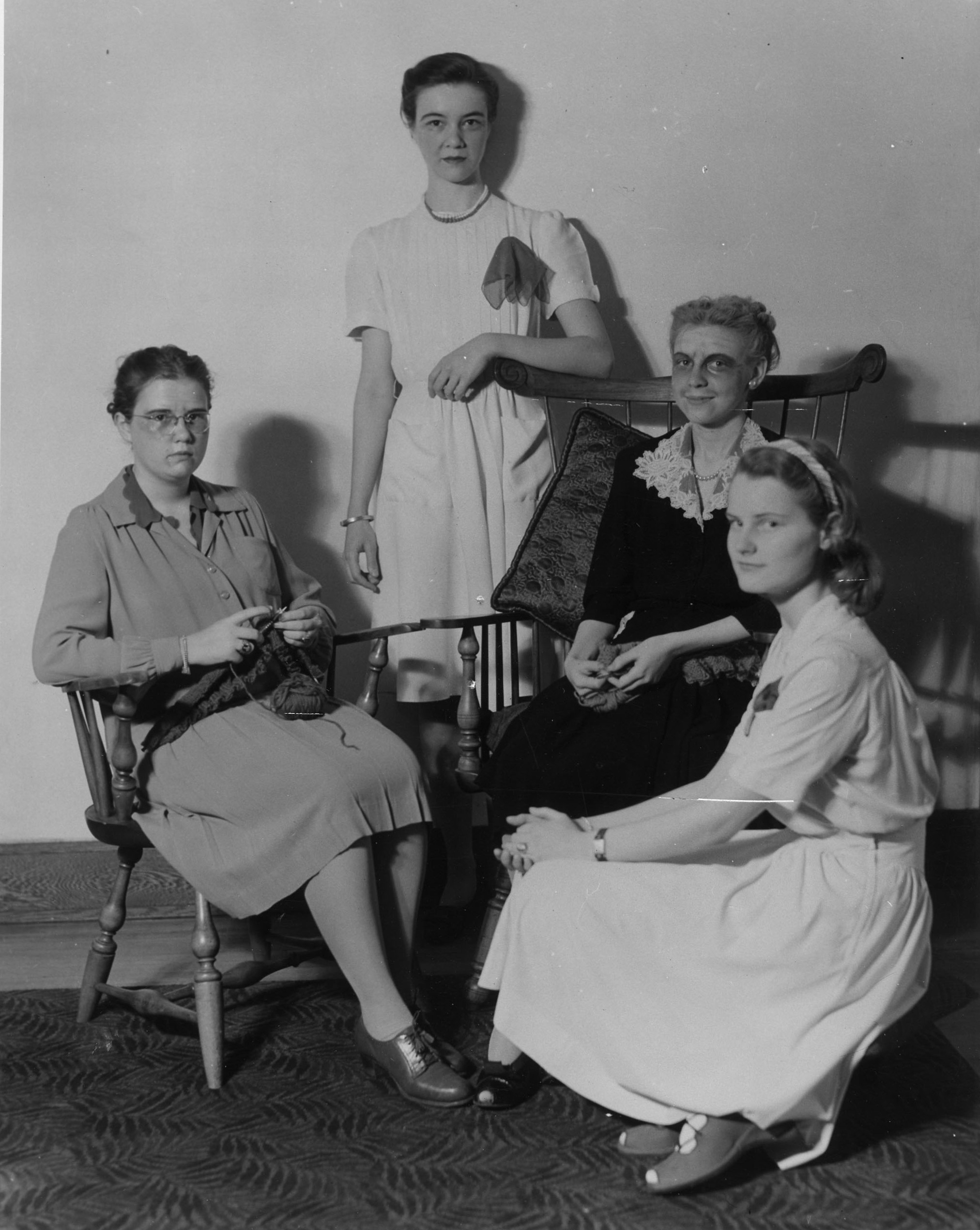 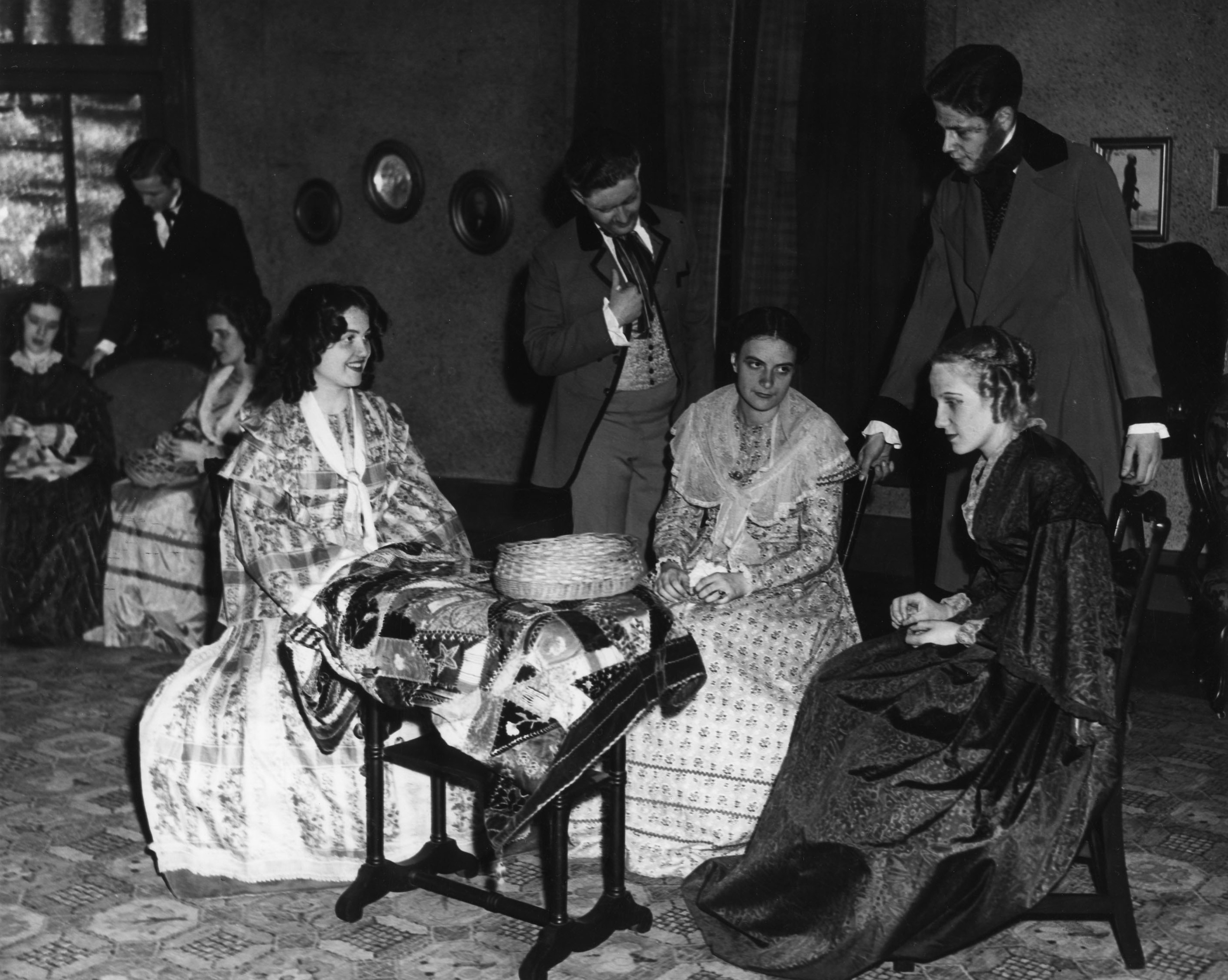 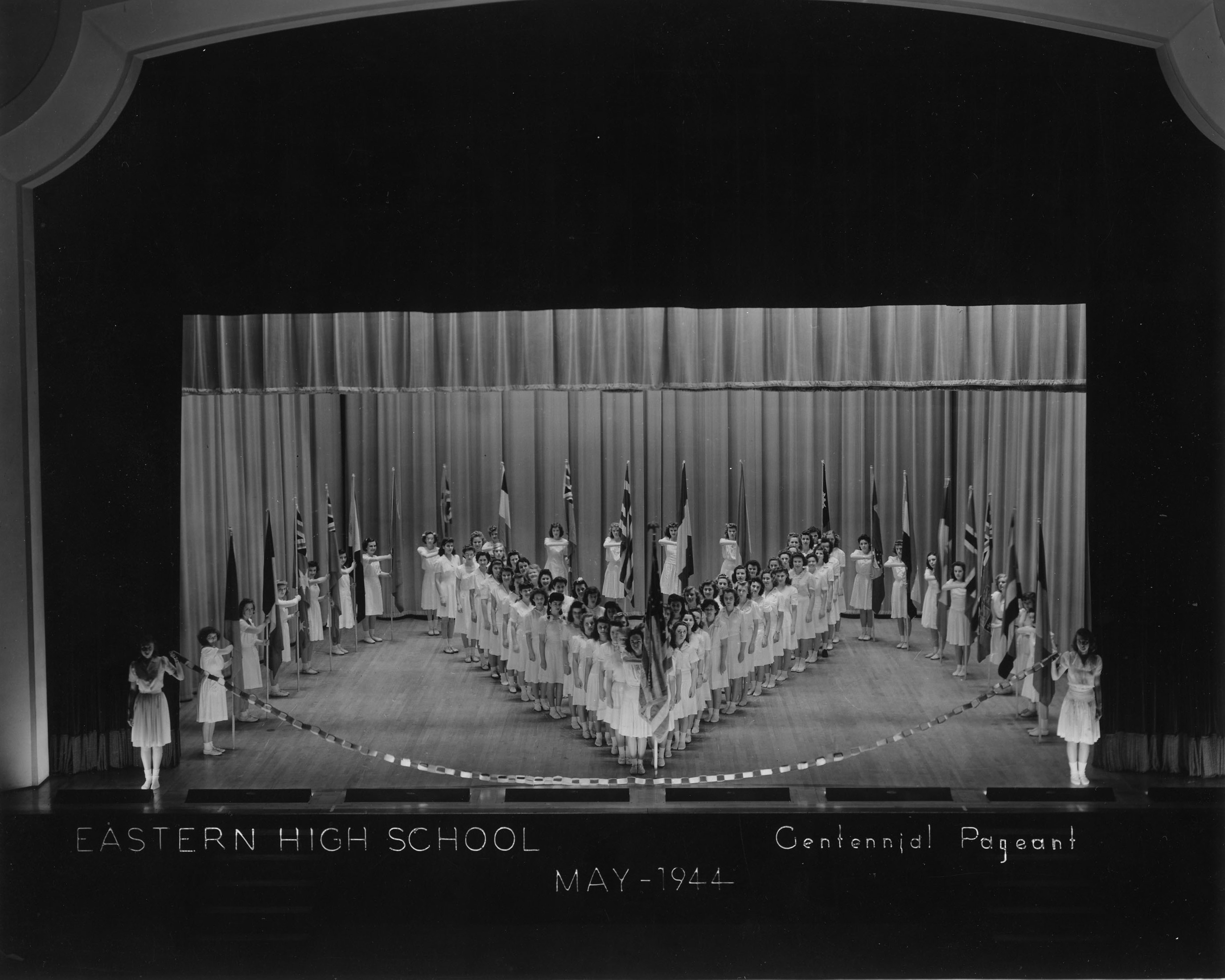 The final big event of Eastern’s centennial celebrations was an alumnae reunion on June 9, 1944. Over 2,000 graduates came to Eastern to meet up with old friends, talk to current students, look at historical exhibits in classrooms, and enjoy a box supper on the lawn. Roll call for the classes present began at 1871, which was represented solely by the 87-year old Miss Margaret Bidlingmayer. Her younger sister, Josephine Harp, represented the Class of 1876. They, and the younger alumnae of the school, watched as the Class of 1944 sang songs and presented their class banner as a parting gift to the school. And so the celebration of a pioneering school’s hundredth year wound down. 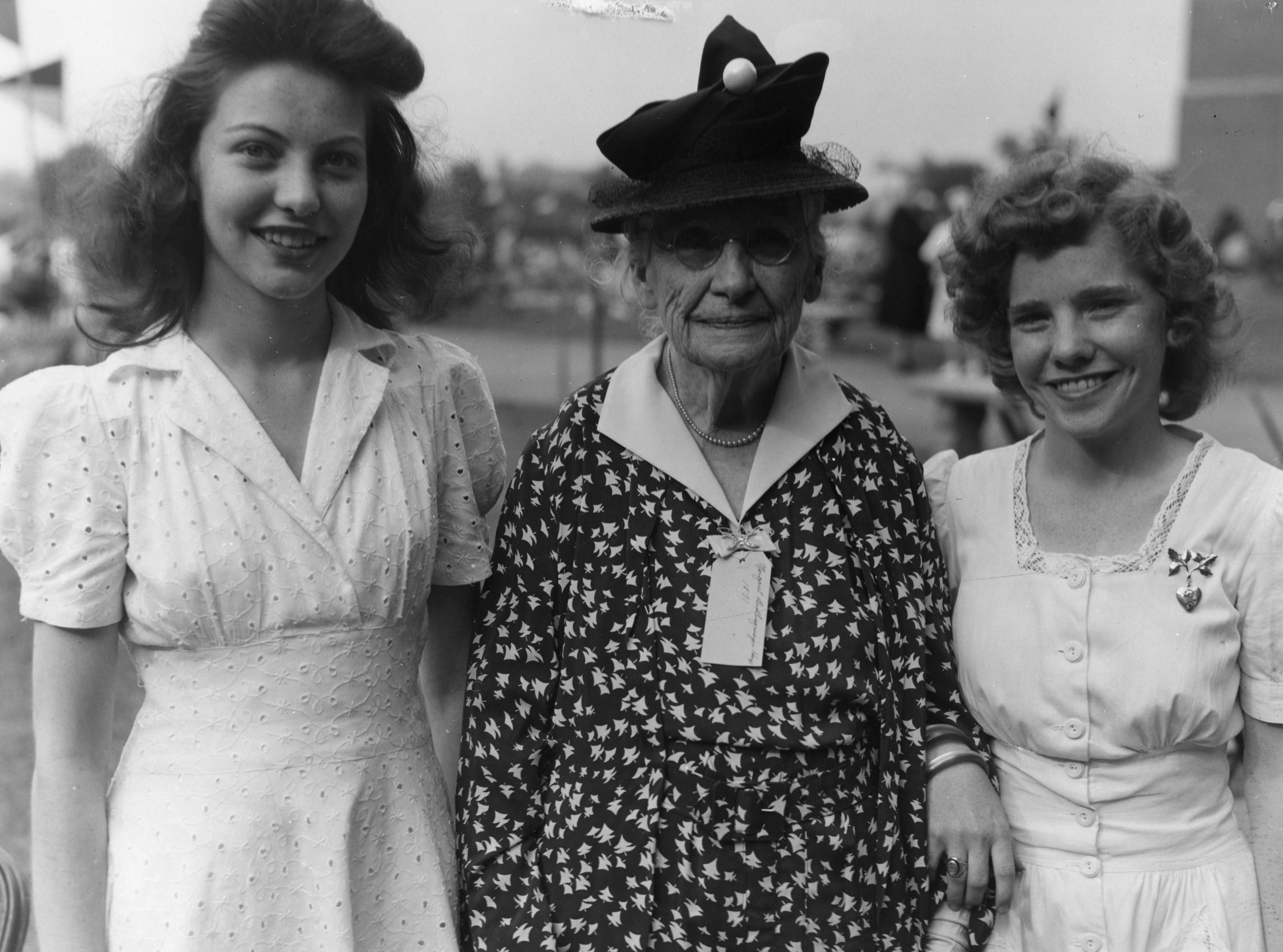 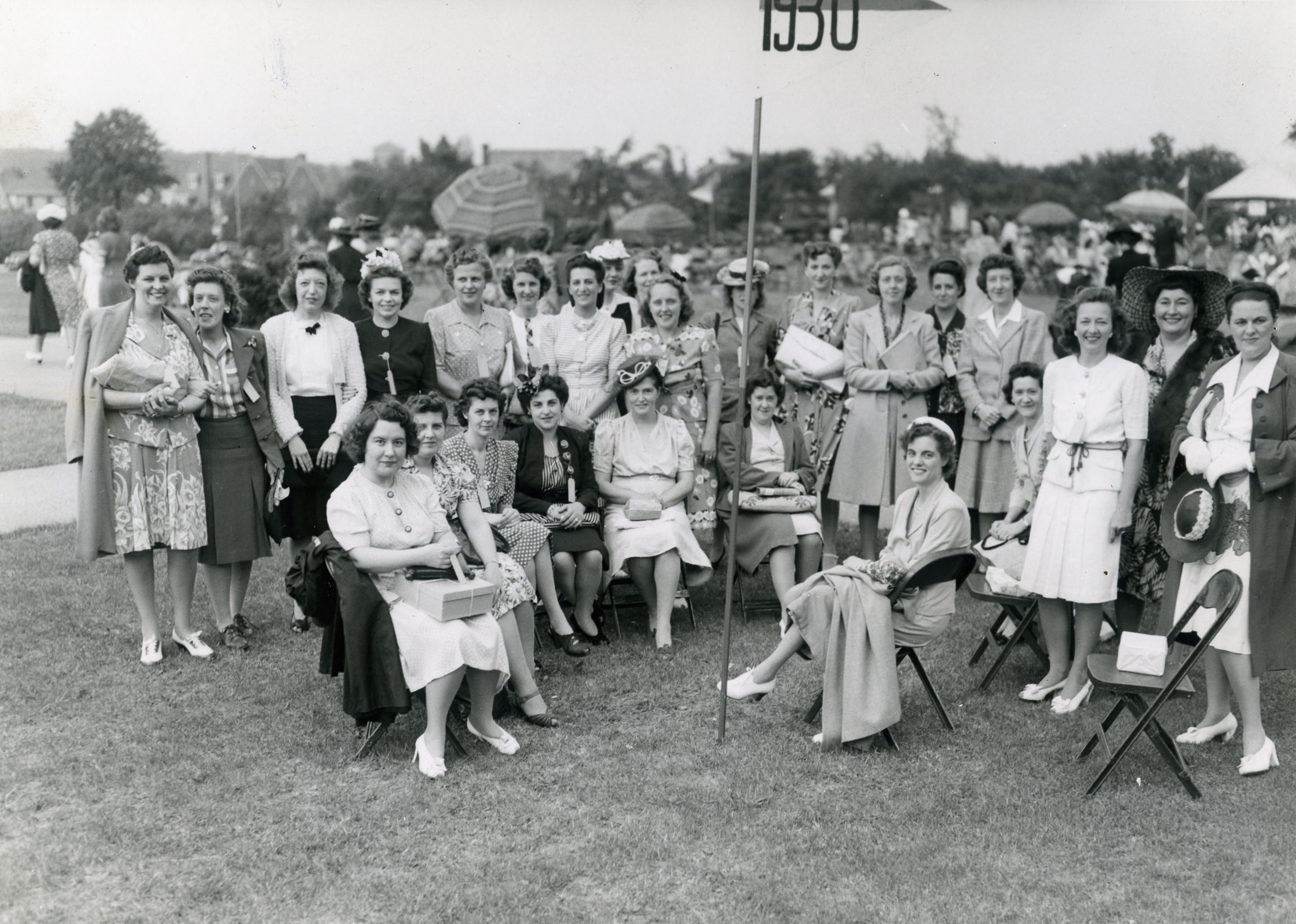 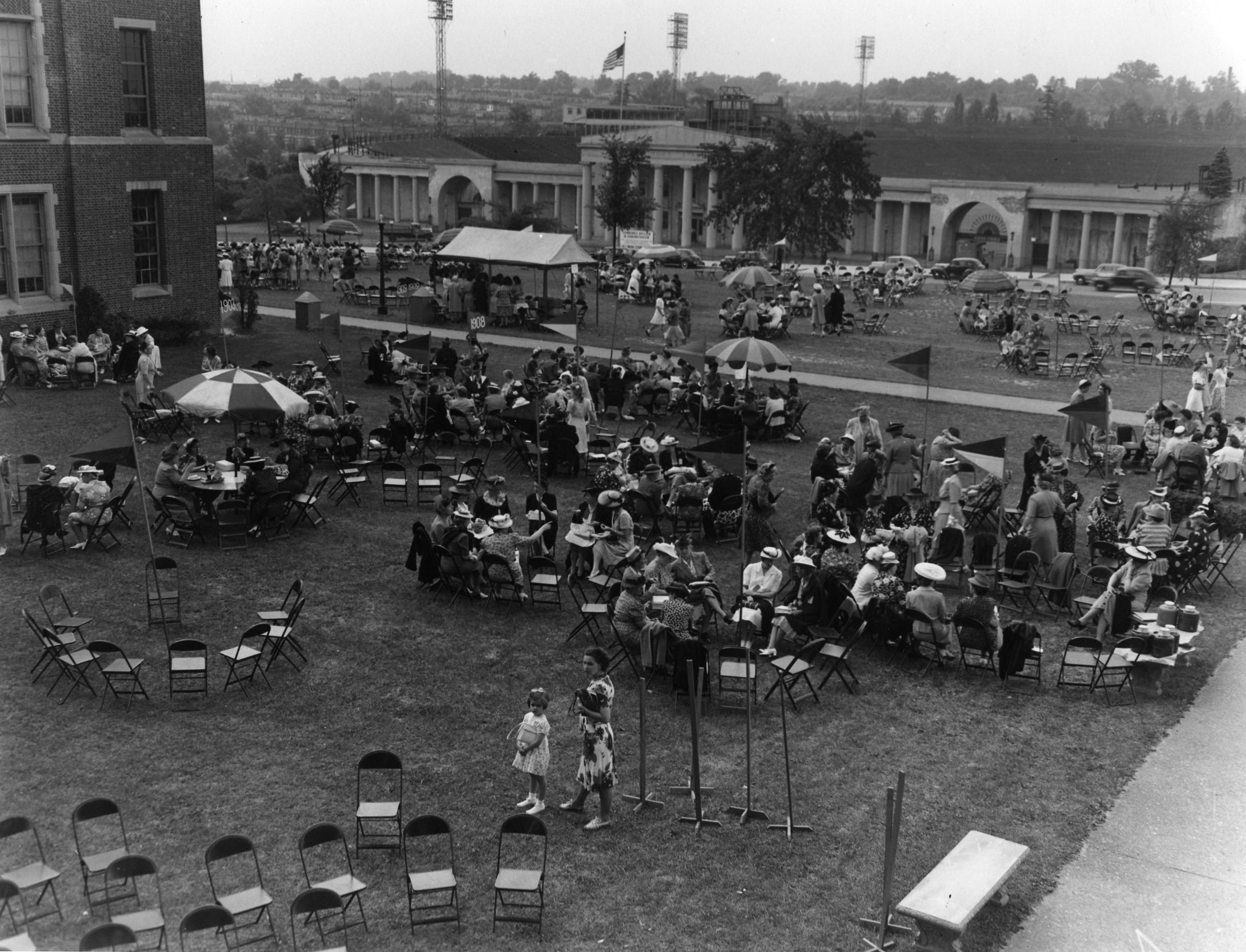 Despite the high hopes of all who attended these events, Eastern High did not reach its 150th anniversary. Unlike its sister, Western, who continues to this day, Eastern High was plagued with building problems, white flight, racial tensions in the late 1960s, and declining admissions. While the admittance of male students helped the admissions problem, and while the students remained proud of their school, it was shut after the 1984-85 school year in an effort to reduce redundancy and save money by the over-extended Baltimore City School System. Most students were sent to Lake Clifton High School, and the building was sold to, and is currently used as offices by, the Johns Hopkins Medical Institutions. However, its legacy of education lives on in the families of women who were educated especially well for their time, in the colleges and universities they attended, and in the living alumnae with us today.

This web site is presented for reference purposes under the doctrine of fair use. When this material is used, in whole or in part, proper citation and credit must be attributed to the Maryland State Archives. PLEASE NOTE: The site may contain material from other sources which may be under copyright. Rights assessment, and full originating source citation, is the responsibility of the user.

Tell Us What You Think About the Baltimore City Archives Website!

Gratefully acknowledging the generous financial support of the NHPRC. Our semi-annual reports to the NHPRC have been posted online.