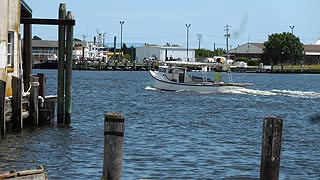 Report (with Department of Natural Resources) to General Assembly on evaluation of Commission work due Nov. 1, 2013 (Chapter 241, Acts of 2008)

Somer Cove Marina was established at Crisfield in Somerset County, Maryland, in 1958. The Marina is on Somers Cove off of Daugherty Creek, a tributary of Tangier Sound. On the southern tip of Maryland's Eastern Shore, the Marina was deeded by the City of Crisfield to the Department of Natural Resources in 1980. The Marina is the largest State-owned marina in Maryland. In November 2008, the Somers Cove Marina Commission was established by the General Assembly to oversee its operation (Chapter 241, Acts of 2008).

To improve services to the boating public, the Commission, with the Executive Director, annually develops a master plan on how to operate, maintain, develop, and improve Somers Cove Marina. To implement the master plan, the Commission adopts an operating budget which may use the Somers Cove Marina Improvement Fund towards its objectives. Futher, the Commission sets policy, generally oversees marina operations, and assesses slip fees and other charges. To fund its capital budget, the Commission must apply for grants from the State's Waterway Improvement Fund, and may receive funds from the City of Crisfield, Somerset County, the State, and other sources.