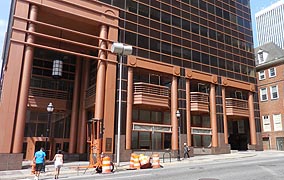 In 1971, the Office of Public Defender was created (Chapter 209, Acts of 1971). Its formation had been recommended in December 1970 by the Joint Governor's Commission and Baltimore City Bar Association's Committee for the Study of the Public Defender System for the State of Maryland.

Prior to authorization of the Office of Public Defender, there was no right to apppointed counsel in Maryland, only the discretionary authority of the trial court to appoint counsel (Chapter 46, Acts of 1886).

Today, in Maryland, the Office of Public Defender provides legal representation to defendants who cannot afford to hire a private attorney without incurring undue financial hardship. Assistance of counsel is extended to qualified indigent adults (who may be incarcerated or not) and to juveniles in proceedings before the District Court of Maryland and Circuit Courts, and during juvenile hearings.

Throughout the legal process, the Office of Public Defender represents defendants while in custody, during interrogation, and at the preliminary hearing, arraignment, trial, and appeal. It defends clients in criminal and juvenile proceedings, post-conviction proceedings, probation and parole revocations, involuntary commitments to public or private institutions, and termination of parental rights proceedings. The Office also provides counsel to parents in Child in Need of Assistance (CINA) proceedings and civil contempt proceedings for nonsupport before a judge where there is the possibility of incarceration. For indigent persons facing civil commitment to Maryland psychiatric hospitals, the Office provides representation as well.

Through a central headquarters and forty-eight offices in twelve districts conforming to the twelve geographical districts of the District Court of Maryland, the Office conducts its work.

Thirteen members constitute the Board of Trustees of the Public Defender system. Eleven are appointed by the Governor with Senate advice and consent to three-year terms. One member each is selected by the Senate President and House Speaker. All members must be practicing attorneys-at-law (Chapter 224, Acts of 2010; Code Criminal Procedure Article, secs. 16-301, 16-302). 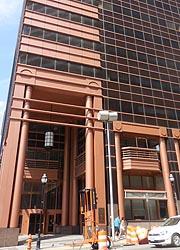 Appointed by the Board of Trustees to a six-year term, the Public Defender must be an attorney-at-law who has been admitted to practice in Maryland by the Court of Appeals and engaged in the practice of law for a period of five years prior to appointment.

FORENSICS DIVISION
The Forensics Division litigates criminal cases in which scientific evidence has a special impact, and provides technical support to other divisions in scrutinizing forensic evidence. The Division also develops experts in present and emerging forensic fields, and trains public defenders about the effective use of evidence and cross examination of experts.

JUVENILE PROTECTION DIVISION
The Juvenile Protection Division was organized in 2007.

For juvenile offenders represented by the Office of the Public Defender, the Division monitors conditions of confinement in facilities operated by the Department of Juvenile Services. The Divison works with trial attorneys to ensure that court orders are followed and the health and safety of detained juveniles are protected.

The Major Crimes and Complex Litigation Division began as the Death Penalty Defense Unit in 1988, and was renamed the Capital Defense Division in 1989. The Division reformed as the Aggravated Homicide Division on July 1, 2009 [In 2013, the death penalty was repealed in Maryland (Chapter 156, Acts of 2013)]. Formerly under District Operations, the Divison was placed directly under the Public Defender in 2015. In January 2016, it received its present name.

The Office of Public Defender does not represent clients in federal court.

In 1975, the Appellate Division was formed.

The Division has statewide responsibility for representing Public Defender clients in direct appeals from the circuit courts to the Court of Special Appeals, and in further review proceedings before the Court of Appeals and the U.S. Supreme Court. It provides research and consultation on legal issues for staff and panel attorneys throughout the twelve Public Defender Districts. The Division also publishes a monthly Appellate Update with summaries of reported Maryland appellate court and U.S. Supreme Court opinions relating to criminal law, as well as articles on procedure, trial tactics, and changes in rules of procedure and criminal statutes.

Since 1975, the Mental Health Division has functioned within the Office of Public Defender.

At hospitals throughout the State and in related court proceedings, the Division furnishes counsel to persons involuntarily confined to public and private mental health facilities in Maryland.

Representation is provided to indigent clients upon admission to the hospital, at their periodic reviews, and when seeking judicial release from psychiatric institutions. Criminals in cases involving mental health and similar issues also are represented by the Division. For these, Division staff assist every district and division in the Public Defender system and appear in cases from the district and juvenile courts through the circuit courts to the Court of Appeals.

The Parental Defense Division originated in 1991 as the Children in Need of Assistance (CINA) Division. It reformed under its present name in September 2017.

The Division provides representation for parents and legal guardians defending against allegations of abuse and neglect when removal of the children by the State is a possibility. In addition, the Division represents parents at hearings to terminate parental rights, and guardians at guardianship review hearings. 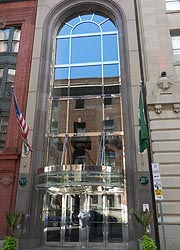 The Post-Conviction Defenders Division, originated in 1975 as the Inmate Services Division, and reformed as the Collateral Review Division in 1993. The Division received its present name on September 1, 2015.

The Division offers legal assistance to qualified clients who are serving a sentence of incarceration or are on parole or probation for the conviction. The Division provides representation in a wide range of collateral post-trial proceedings, including post-conviction applications, motions to reopen, parole revocation, habeas corpus proceedings (including extradition), interstate and intrastate detainers, and requests for credit for time spent in prison prior to trial and sentencing.

Informally and without recourse to litigation, the Division also helps resolve inmate complaints and personal problems that arise during imprisonment. Referrals are made to the Prisoners Assistance Project, and the Inmate Grievance Office of the Department of Public Safety and Correctional Services.

Formerly located at 300 West Preston St., Baltimore, the Division moved to its present address in August 2015.

District Operations encompasses the legal representation which the Office of Public Defender provides to defendants through twelve district offices whose boundaries correspond to those of the twelve District Courts. Also under District Operations is the Aggrevated Homicide Division.