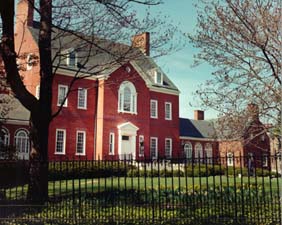 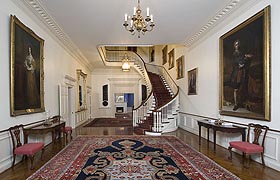 Government House is the official residence of the Governor of Maryland, and has served as such since 1870. Before its construction, Maryland colonial and State governors, from 1753 to 1869, had resided in the Edmund Jennings House, formerly on the grounds of the U.S. Naval Academy. The Jennings House and property were sold by the State in 1869 to the U.S. Naval Academy, and that original house later was demolished in 1901. The building presently known as Government House was erected in 1870, and designed originally by Maryland architect, R. Snowden Andrews (1830-1903). It was remodeled in 1936 by architect Clyde N. Friz. 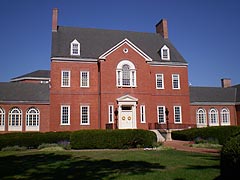 On behalf of the State, the Trust may accept gifts and loans of property for use in the State rooms of Government House. No changes in the internal design or furnishings of any State room of Government House are allowed unless approved by the Trust. In performing its duties and responsibilities, the Trust consults with and seeks the advice of the Commission on Artistic Property, and the Board of Trustees and Council of the Maryland Center for History and Culture.

The Trust consists of seventeen members. Five voting members include the Governor, the Senate President, the Speaker of the House of Delegates, the Secretary of General Services, and the Director of the Maryland Historical Trust, or their designees. Nine advisory ex officio nonvoting members also serve on the Trust with three nonvoting public members appointed by the Governor. The Secretary of General Services serves as chair (Code State Government Article, secs. 9-601 through 9-606).