Origins of the Maryland Energy Administration trace to 1973 when the Governor by Executive Order formed the Office of Energy Policy. 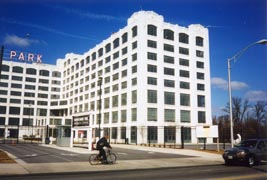 For power plants, transmission lines, substations, pipelines for natural gas and petroleum, and storage facilities, the Administration works with federal, regional and State authorities to develop protection plans. It is the lead agency for implementing alternative fuel policy (National Energy Policy Act of 1992). It also serves as the State conduit for federal energy programs from the U.S. Department of Energy.

The Director of the Administration is appointed by the Governor (Code State Government Article, secs. 9-2001 through 9-2005).

Work of the Administration is carried on by three divisions: Energy Policy, Planning and Analysis; Energy Programs; and Finance, Budget and Administration.

The Program awards grants for energy-efficient projects that generate significant reductions in energy use and then passes on savings to the State's low- and moderate-income residents.

SOLAR, NUCLEAR, & STORAGE
Solar, Nuclear, and Storage began as Solar Programs and Grid Resiliency. It promotes the use of renewable solar and geothermal energy technologies as clean sources of new electricity generation. Grants are available to Maryland householders to install renewable systems in their homes.

To promote the efficient use of energy, State Buildings and Energy Code works with State and local government agencies. It promotes the use of energy performance contracts, and carefully reviews new construction and renovation plans for government buildings.

State Agency Loan Program. Managed by this office, the Program provides zero-percent interest loans to State agencies for cost-effective energy improvements in State facilites. Under this program, lighting, controls, and heating and cooling equipment have been upgraded in State buildings.

RECORDS MANAGEMENT
Since October 1, 2017, the Maryland Energy Administration has had a program for the continual, economical and efficient management of its records. The Administration's Records Officer develops and oversees the program, and serves as liaison to the Records Management Division of the Department of General Services, and to the State Archives (Chapter 539, Acts of 2017; Code State Government Article, secs. 10-608 through 10-611).