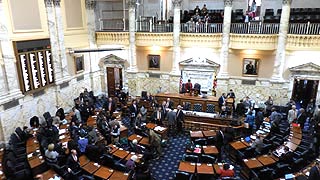 17th Century. In Maryland, the first General Assembly, a law-making assembly of freemen, met at St. Mary's City on February 26, 1634/5. This proprietary assembly was one body consisting of the governor and council, and a general assembly of all freemen. In 1650, it separated into two chambers.

What today is the House of Delegates began as the Lower House of the General Assembly in 1650, when the legislature became a bicameral body (Chapter 1, Acts of 1650). To the Lower House, freemen in each hundred elected burgesses as their representatives. From 1654, the county replaced the hundred as the local area represented.

During the first century of its existence, the Lower House waged battle with the Upper House for political influence in the Maryland colony. The Upper House consisted of the governor and his council, all personally appointed by Lord Baltimore, and thus dedicated to protect his interests in Maryland. Conversely, the Lower House pushed for change in the colony, claiming to be the true elected representatives of the people. In this context, the Lower House continually fought for more power by asserting exclusive rights in certain legislative areas, such as levying taxes and originating money bills. Disputing those claims, the Upper House sought to block such actions by the Lower House. 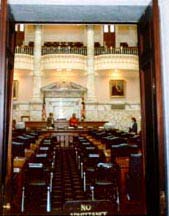 In 1689, the transformation of Maryland from a proprietary to a royal colony temporarily quieted disputes between the Lower House and the governor and council. Appointed by the crown, royal governors allowed the Lower House substantial latitude with its legislative agenda. This was evident in the first assembly convened under crown rule.

The first royal assembly of 1692 was both innovative and prolific in its legislative duties, passing 85 acts in a single legislative session. As the opportunity presented itself, the Lower House ended the governor's influence over the election of delegates. For the first time, elected delegates could attend the session without the need for the governor's special writ (Chapter 76, Acts of 1692). During the same session, standing or continuing committees were established in the Lower House in 1692. These committees dealt with elections, legislation, aggrievances, and accounts. They eliminated the Lower House's reliance on ad hoc committees and created the first modern legislature in Maryland. During this active period, the Lower House became known as the House of Delegates.

18th Century. When the Maryland colony was returned to proprietary control in 1715, Charles Calvert, 5th Lord Baltimore, encountered a government which bore little resemblance to the one seized from his grandfather twenty-five years earlier. Nor was the House of Delegates willing to relinquish the political independence it had gained while under royal control. Consequently, in the restored proprietary government, the House of Delegates played a stronger role in its relations with Lord Baltimore, the governor, and the Upper House.

A major legislative accomplishment of this period was the revision and publication of the laws of the colony (Chapter 25, Acts of 1715). Three years later, the House of Delegates compiled all of the laws passed since 1692 and issued them in a single volume.

Adopted by the 9th Provincial Convention on November 8, 1776, the Constitution of 1776 established the House of Delegates (Const. 1776, secs. 1-6). As part of the reconstituted General Assembly, the new delegates met in Annapolis for their first legislative session convened by the Council of Safety on February 5, 1777.

Initially, representation was based on geography as the voters of each county elected four delegates, and two each were elected from Annapolis and Baltimore. These delegates served one-year terms. 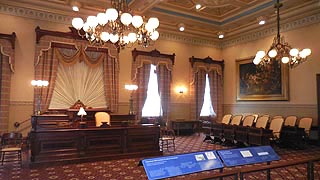 19th Century. The nineteenth century brought changes to voting, including voting for delegates in Maryland.

In 1802, property qualifications for voting in local and State elections were removed by Constitutional amendment (Chapter 90, Acts of 1801, confirmed 1802). Also in 1802, viva voce voting at elections changed to voting by ballot. 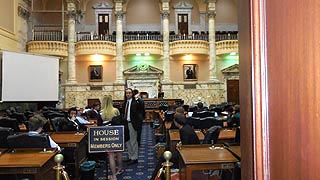 Political unrest in the 1830s forced constitutional reform, a more popular base for government, and reapportionment based loosely on population. With the election of October 3, 1838, voters ratified a constitutional amendment that allowed each county to choose at least three and up to six delegates, depending on its population. Baltimore City elected the same number of delegates as did the most populous county, but after 1840, Annapolis was considered part of Anne Arundel County and no longer had separate representation.

Counties retained their power as political units. In an attempt to achieve equal representation, reapportionment was required after every federal census. 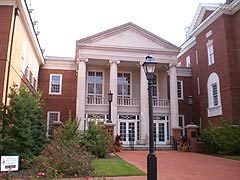 The current pattern for distribution of seats in the House of Delegates began with the legislative apportionment plan of 1972 and has been revised every ten years thereafter. A Constitutional amendment, the plan created 47 legislative districts, many of which cross county boundaries to delineate districts relatively equal in population.

Each legislative district sends three delegates to Annapolis for a total of 141 members of the House. Some of the larger districts are divided into delegate subdistricts to provide local representation to areas not large enough to constitute an entire legislative district.