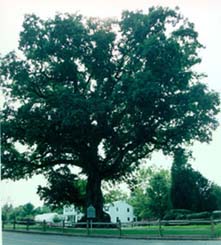 Decidedly uncommon was the magnificant specimen of White Oak represented here. Known as the Wye Oak, it was located at Wye Oak State Park in Talbot County on the Eastern Shore of Maryland. On June 6, 2002, the tree was felled during a powerful thunderstorm. 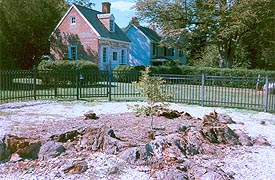 Estimated to be nearly 500 years old, the old Wye Oak was the largest white oak tree on record, both in Maryland and the nation. It measured 31 feet, 10 inches, in circumference, stood 96 feet tall, and had an average crown spread of 119 feet. Among its impressive characteristics were massive buttresses or "knees" at the base which helped support this huge tree.

Before it was toppled, the Wye Oak was one of only two trees surviving as a National Champion since inception of the Champion Trees National Register in 1945. Seedlings from its acorns have been grown by the State Forest Service and other programs have been tried to preserve the Tree's genetic makeup. In April 2002, an infant white oak, cloned from the original Wye Oak, was planted on the grounds of George Washington's estate at Mount Vernon, Virginia.