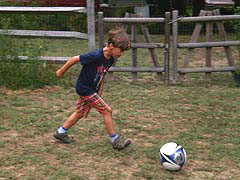 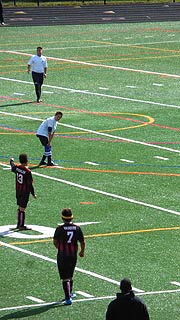 The game known in America as soccer was first played in England during the 19th century as football, and is currently played in over 200 nations throughout the world. Only Canada, the U.S., and Samoa use the term soccer, and the offically recognized title is association football. The Federation Internationale de Football Association (FIFA) oversees continental and national leagues, as well as makes arrangements for the World Cup, the highest level of soccer competition. Played every four years, the World Cup is held over a period of four weeks, with 32 nations competing. It is next scheduled for November 21 to December 18, 2022 in Qatar.

In Maryland, soccer is played by all age groups, and at varying skill levels. The Maryland State Soccer Association oversees six amateur leagues throughout the State, and is an affiliate of the United State Soccer Federation (USSF), the United States Adult Soccer Association, and the U.S. Olympic Committee. Additional levels of skill, ranging from amateur to professional, are included within other USSF affiliates. 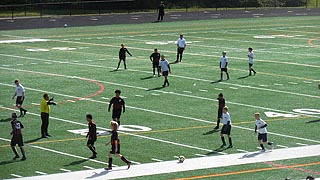 At the college level, soccer is organized by the National Collegiate Athletic Association (NCAA), and is available at most colleges and universities in Maryland. As a fall sport, college soccer is played from August through December. Maryland colleges have won the NCAA championship on a number of occasions, most recently in 2018, when the University of Maryland, College Park men's team defeated the University of Akron for its fourth national title.

MAJOR ARENA SOCCER LEAGUE (MASL)
There have been two Baltimore Blast teams in Baltimore. The first team played from 1980 to 1992 in the Major Indoor Soccer League. They won the Championship in 1984. The first Blast team disbanded when the League ceased operations in 1992.

The Blast plays at the SECU Arena at Towson University, 7500 Osler Drive, Towson. The arena seats up to 5,200 patrons.

The primary athletic organizer of collegiate Sports, the NCAA structures colleges into three divisions, with schools further organized by conferences.

U.S. OLYMPIC COMMITTEE
The U.S. Olympic Committee is the governing body of all Olympic sports in the United States, and is responsible for the creation and funding of Team USA, which represents the United States in all international soccer competitions, including the World Cup, and is the nation's representative to the Federation Internationale de Football Association (FIFA).