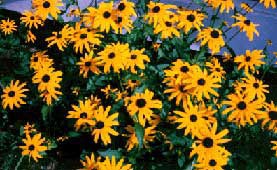 The Black-Eyed Susan (Rudbeckia hirta) has been the official Maryland flower since 1918 when it was designated the "Floral Emblem" of Maryland by the General Assembly (Chapter 458, Acts of 1918; Code General Provisions Article, sec. 7-306).

In his Species Plantarum (1753), the Swedish naturalist Carl Linnaeus (1701-1778) described and named the flower Rudbeckia after Olav Rudbeck and his son, both professors at the University of Uppsala, and hirta from the Latin meaning "rough hairy".

Black-Eyed Susans are perennial daisies or coneflowers, members of the sunflower family (Asteraceae). The flower heads measure 2 to 3 inches in diameter with yellow rays circling a dark-brown, spherical center. Commonly found in fields and on roadsides, they bloom between May and August, reaching 2 to 3 feet in height. They are native to the United States, east of the Rocky Mountains.