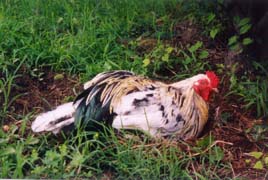 In response to an avian influenza outbreak, the Mid-Atlantic Poultry Health Council was established in 1987 in accordance with a July 22, 1987, memorandum of understanding, signed by the governors of Delaware, Maryland, Pennsylvania, and Virginia.

The Council coordinated policy for poultry disease management. Each signatory state had six members. Annually, the chair of the Council rotated among the member states.

By 2004, as industry groups such as Delmarva Poultry Industry, Inc., and the U.S. Department of Agriculture took on a more active role in establishing emergency response protocols, the Council ceased to meet.

Formed by the Governor in 1987, the Maryland Poultry Health Advisory Committee advised the Secretary of Agriculture on poultry health management.

In the event of an outbreak of poultry disease in Maryland, the Committee was to assist the Secretary of Agriculture implement control measures. Committee members also represented Maryland on the Mid-Atlantic Poultry Health Council.