Educational matters that affect Washington County come under the control of the Board of Education (Code Education Article, secs. 4-101 through 4-126).

The Washington County Public School System is governed by the County Board of Education (Code Education Article, secs. 4-101 through 4-126). In addition, through the review and approval of the annual operating and capital budgets, Charles County government exercises authority over the County Public Schools. Moreover, through the establishment and monitoring of various financial and academic policies and regulations, the State Department of Education also has considerable oversight of county public schools. Indeed, under Maryland law, the State Department of Education works with county public schools to comply with requirements and mandates of federal law.

In Washington County, the Public School System has forty-five schools. These include 8 high schools, 7 middle schools, 26 elementary schools, one alternative school, one special education school, and one outdoors center. In Fiscal Year 2017, some 22,545 students were enrolled in the County's public schools.

BOARD OF COMMUNITY COLLEGE TRUSTEES
For Hagerstown Community College, the Board of College Trustees is the governing body.

The Board consists of seven members. They are appointed to six-year terms by the Governor with Senate advice and consent. The President of Hgerstown Community College serves as secretary/treasurer to the Board (Code Education Article, sec. 16-101 through 16-107).

The University System of Maryland Hagerstown is overseen by the Governing Council, and is aided by the Board of Advisors.

BOARD OF ADVISORS
The Board of Advisors advises the University System of Maryland on issues, needs, and interests of the Hagerstown region.

Appointed by the Chancellor of the University System of Maryland, the Board has twenty-two members representing education, government, and business.

GOVERNING COUNCIL
Subject to the approval of the Board of Regents of the University System of Maryland, the Governing Council approves policies affecting the academic program inventory, annual budget, and financial plan for the University of Maryland Hagerstown.

The Council is made up of the provosts of the participating institutions. The Senior Vice-Chancellor for Academic Affairs of the University System of Maryland chairs the Council.

The Washington County Free Library began in 1898. In April 1905, it introduced the first bookmobile in the nation. Drawn by two horses, the "library wagon" began by delivering boxes of books to either the general stores or post offices in the towns and villages throughout the County. Destroyed in a collision with a freight train in August 1910, the original book wagon was replaced by a motorized vehicle in 1912. 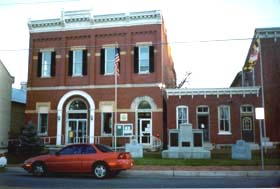 Based in Hagerstown, the main Library formerly was located at 101 Tandy Drive, but later moved to its present location at 100 South Potomac Street, Hagerstown. The main Libray has seven branches. They are in Boonsboro, Clear Spring, Hancock, Keedysville, Sharpsburg, Smithsburg, and Williamsport.

Founded in 1923, the Smithsburg Library moved to its present location in July 2006.

In 1936, the Williamsport Memorial Library was erected as a memorial to fourteen local high school students who died in a bus accident at Rockville.

Origins of the Hancock War Memorial Library trace to 1907 when a librarian would travel once a week from Hagerstown to Hancock. Thereafter a library building was constructed in 1969 at Hancock in tribute to armed services veterans of Hancock. That building suffered from structural problems and floods in the 1990s. It was moved to Widmyer Park in 1997. Opened on October 30, 2018, a new library replaced the original structure.

At Clear Spring, the Leonard P. Snyder Library opened in 2003.

BOARD OF LIBRARY TRUSTEES
The Board of Library Trustees plans and sets policy for and operates the Washington County Free Library.