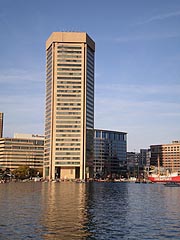 The land which became Hart-Miller Island State Park was aquired by the State in 1977, and with it a plan to restore Hart Island, Miller Island, and Pleasure Island, a three-island chain at the mouth of Back River in Baltimore County. Dredged material from Baltimore's harbor was to be pumped into an area that would be made part of the Park.

In 1981, the Hart-Miller-Pleasure Island Citizens Oversight Committee was formed by the General Assembly (Chapter 587, Acts of 1981). Initially, the Committee was charged with monitoring the redeposit of spoil and Baltimore County tributary spoil within five miles of the Hart-Miller-Pleasure Island chain in eastern Baltimore County, as well as the impact of the dredged materials on the surrounding area. The Committee also heard complaints lodged by persons affected by this material (Code Environment Article, sec. 5-1104).

The deposit of dredged materials started in 1984 and was completed in 2010. Because the depositing no longer required monitoring, the Committee's role changed in October 2011 (Chapter 227, Acts of 2011). Now, the Committee oversees and monitors the future development, use, and maintenance of the Hart-Miller-Pleasure Island chain, and the water quality in the area immediately surrounding the islands.

Today, the Hart-Miller Island covers 1,100 acres. What was once a dredged material containment facility has been transformed by the Maryland Port Administration into a recreation area and bird sanctuary.

As of June 10, 2016, the Island's southern region of 300 acres now is accessible. It is open to the public for recreational purposes, including hiking and bike riding, when rangers from the Maryland Park Service are present, Thursdays through Mondays, 11:00 a.m. to 4:00 p.m.

As a bird sanctuary, Hart-Miller Island offers habitats for both nesting and migratory species, including those considered rare, threatened, or endangered in Maryland.

The Committee consists of eleven members appointed to two-year terms by the Governor with Senate advice and consent (Code Environment Article, sec. 5-1104).