DEPARTMENT OF THE ENVIRONMENT 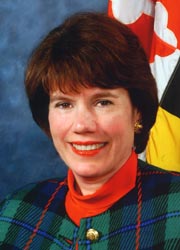 Special Secretary, Department of Planning, May 2003 to August 2004.