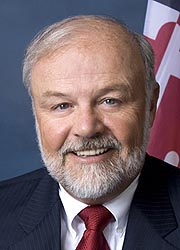 John Patrick McDonough graduated from Bladensburg High School, Bladensburg, Maryland (Class of 1968); The Johns Hopkins University, B.A. (Class of 1972); and University of Maryland School of Law, J.D. (Class of 1977). He was Chief of Staff for the County Executive of Prince George’s County and a practicing lawyer for thirty years until his appointment as Secretary of State. Twenty of those years were with the firm of O’Malley, Miles, Nylen & Gilmore where he was a managing partner for ten years.

He was active with the National Association of Secretaries of State, having served on the Executive Board and as Co-Chair of its International Committee and served as Chair of the Democratic Association of Secretaries of State. He has held positions with many civic and charitable organizations, including: Board of Visitors, University of Maryland School of Law; President’s Roundtable, Leadership Maryland, Catholic Charities, the Red Cross, and the American Heart Association.

In July 2008, Mr. McDonough was appointed Secretary of State by Governor O’Malley, and chaired the Governor’s Subcabinet for International Relations, oversaw notaries, charities and labor relations and was one of the State’s six constitutional officers, along with the Governor, Lt. Governor, Comptroller of Maryland, Attorney General, and State Treasurer.