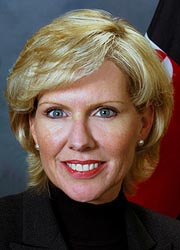 On August 2, 2005, Governor Robert L. Ehrlich, Jr. swore Mary D. Kane in as Secretary of State in Maryland. Secretary Kane was only the fourth woman in 167 years to be appointed to this Constitutional office. She is the first Republican woman to hold this position.

As the Secretary of State, Ms. Kane was a member of the Governor's Executive Council. Her duties covered a wide range of subjects. She was responsible for the Charities and Legal Services Division. This division involves oversight and registration of charitable organizations within the state, administration of the Maryland Charity Campaign for state employees, notaries public, special police commissions, the extradition process, the recordation of the Governor's Executive Orders, certifications, condominium and trademark registrations.

Under the Governor's Subcabinet for International Affairs, Secretary Kane was responsible for carrying out international protocol functions on behalf of the Governor's office. The objective of the Subcabinet is to encourage open communication and collaboration among State government agencies regarding international relations including business interests, environmental concerns, educational issues, and cultural exchanges. The office is designated to be a centralized source for international protocol, information, and logistics needs. In conjunction with Maryland's focus on international affairs, the Secretary of State's office has been directed by the Governor to administer the Maryland Sister States program. This program is the conduit for Maryland's eight official Sister State relationships established with states, regions, or provinces in various countries around the world.

The Division of State Documents, publisher of the Code of Maryland Regulations and Contract Weekly, also is administered by the Secretary of State's Office.

For many years, Secretary Kane was involved in her community. This included being elected to the Parish Council of Our Lady of Mercy Catholic Church in Potomac, Maryland, sitting on the board of the Mater Dei School in Bethesda, MD, and also being involved in the John Carroll Society and the National Alumni Council of Mount Saint Mary’s University. She also ran for the Montgomery County Council in March, 2000 and for the House of Delegates in District 15 in November, 2002. As a graduate of Leadership Montgomery, Ms. Kane chaired their annual session in Annapolis.

The daughter of Irish immigrants, Mary Kane grew up in Wilmington, Delaware. She graduated from Mount Saint Mary’s University in Emmitsburg, Maryland, and the Catholic University of America's Columbus School of Law in Washington, DC. She was of counsel to the law firm of Etheridge, Quinn, McAuliffe, Rowan and Hartinger located in Rockville, Maryland until the Governor appointed her to serve as the Deputy Secretary of State in March 2003. Her previous positions included working on Capitol Hill for a United States Senator, in the legislative office of the American Trucking Associations, and for the legal counsel's office of the United States Chamber of Commerce. She lives in Potomac, Maryland, with her husband, John, and their three children.