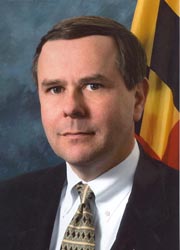 The Governor appointed R. Karl Aumann to be Secretary of State of Maryland on January 15, 2003. Mr. Aumann was confirmed unanimously by the State Senate on January 31, 2003.

Born in Baltimore, Maryland, May 17, 1960, Mr. Aumann attended the School of the Cathedral of Mary Our Queen and Saints Phillip and James School, graduating from Calvert Hall College High School in 1978. Mr. Aumann graduated from Loyola College in Maryland with a B.A. in political science in 1982. He received his J.D. in 1985 from the University of Baltimore School of Law.

Mr. Aumann was admitted to the Maryland Bar in 1986. As an attorney, he was an associate with the Towson firm of Power & Mosner (now Bodie, Nagle, Dolina, Smith & Hobbs) and later with the Baltimore office of Miles & Stockbridge. During his five years with those firms, Mr. Aumann specialized in toxic tort, product liability and medical malpractice litigation.

In 1991, Mr. Aumann was appointed by President George Bush as counsel and senior policy advisor to the Appalachian Regional Commission. When Robert L. Ehrlich, Jr., was elected to the U.S. House of Representatives in 1994, Mr. Aumann became his Chief Administrator and District Director, a position he held until 2003. Mr. Aumann's responsibilities included office oversight and policy development, with special focus on international relations.

Secretary Aumann chaired the Governor's Subcabinet for International Affairs, and the Commission on Maryland Military Monuments and was the Governor's representative on the Jefferson Patterson Park and Museum Advisory Board.

A member of the Maryland Historical Society, Sons of the American Revolution, and the Wakefield Improvement Association, Mr. Aumann previously served on the boards of the Community Assistance Network, Historic Hampton, and the Boy Scouts of America (Dulaney District). A communicant at the Cathedral of Mary Our Queen parish, Mr. Aumann is a member of the Parents' Association, belonged to the Men's Choir, and helped found the Friends of Cathedral Music.

Mr. Aumann is married to Delegate Susan Langley Mueller Aumann, an accountant and auditor who represents the 42nd Legislative District (Baltimore County)in the House of Delegates. They have two school-age children - Lang and Catherine.