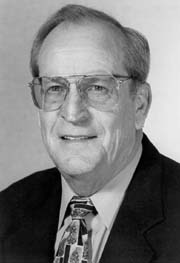 Robert L. Swann was appointed Comptroller of the Treasury by Governor Parris Glendening on July 9, 1998, and was sworn into office on July 14, 1998.

A Calvert County native and 37-year veteran of the Comptroller's Office, Mr. Swann served in several capacities in the agency before becoming Maryland State Comptroller.

He first joined the Comptroller's Office on May 10, 1961, as an investigator with the Alcohol and Tobacco Tax Division. In 1963, he became an auditor in the Retail Sales Tax Division and was promoted as an assistant to Comptroller Goldstein in 1966.

Mr. Swann's expertise in State government has been widely recognized over the years. Governor William Donald Schaefer appointed him to the Executive Task Force to Study the Agricultural Land Preservation Foundation in 1991, and the Governor's Task Force on School Construction in 1992. In 1980, Governor Harry R. Hughes appointed Mr. Swann to the Governor's Task Force on State Procurement Regulations, and the State Use Industries Advisory Committee.

He was awarded the Jaycees Outstanding Young Man Award in Calvert County in 1968, and served as the Calvert County Chair of the March of Dimes, 1967-70.

Mr. Swann was born near Lower Marlboro, Calvert County, Maryland, on December 4, 1935. Educated in Calvert County public schools, he worked in the food distribution industry prior to his public service career. From 1953 to 1961, he served in the Maryland National Guard, and is a member of the 29th Division Association (Post 88).

He is married to the former Dorothy DeBoy and resides in St. Leonard Shores, Maryland. They have one daughter, Michelle, and a granddaughter, Crystal.