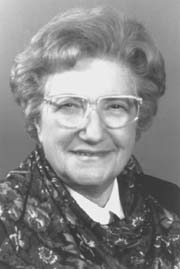 First elected in January 1987, and re-elected in 1991, Lucille Maurer was the first woman to serve as Treasurer of Maryland. She became the twenty-first State Treasurer since the Constitution of 1851 combined the treasurers of the Western and Eastern Shores into one officer selected by the General Assembly. As Treasurer, she also served as a member of the Board of Public Works, the first woman to serve on Maryland's highest administrative council.

A resident of Montgomery County since 1950, Treasurer Maurer served in the House of Delegates from 1969 to 1987. She was a member of the Ways and Means Committee for sixteen years and chaired the Joint Committee on Federal Relations for four years. In the legislature, she became widely known for her experience in developing funding formulas for the public schools and for her leadership in fiscal affairs.

During the years she served in the legislature, Ms. Maurer was active in the National Conference of State Legislatures, chairing the Education Committee, 1979-80, and the Tax and Trade Committee, 1985-86. From 1980 to 1982, she also served on the Intergovernmental Advisory Council of the U.S. Department of Education as a Presidential appointee.

Before her election to the House of Delegates, Treasurer Maurer was twice elected to the Montgomery County Board of Education, serving simultaneously - from 1960 to 1968 - as a Trustee of Montgomery College. In 1967, she was elected to the Maryland Constitutional Convention where she served on the Executive Branch Committee. She was a delegate to several Democratic Party National Conventions.

After her election as Treasurer, Ms. Maurer continued to take an active interest in national professional organizations. She was an active member of the National Association of State Treasurers, serving as President from 1992 to 1993. Formerly, she served as senior Vice-President, Legislative Chair, and Chair of the Northeast Regional Conference. Treasurer Maurer also served on the Executive Committee of the National Association of State Auditors, Comptrollers, and Treasurers as well as its State/Federal Cash Management Reform Task Force. In addition, she held a number of offices and leadership roles in the Women Executives in State Government.

Treasurer Maurer was a member of many community organizations, such as the League of Women Voters. She received many honors and awards from groups, including the Maryland Association of Boards of Education, the Maryland Association of Counties, the Maryland Association for Retarded Children, and chapters of the Business and Professional Women, the National Organization for Women, and the American Association of University Women. In 1988, Treasurer Maurer was awarded the prestigious Louis B. Brandeis Justice in Government Award by the American Jewish Congress. In 1989, she received the Judge Sarah T. Hughes Award for Distinguished Public Service from Goucher College, and the William G. Baker, Jr. Memorial Fund Award from the University of Baltimore's William Donald Schaefer Center for Public Policy. In March 1990, she was inducted into the Maryland Women's Hall of Fame. The Jesse Unrah Award from the National Association of State Treasurers, and the Energy Warrior of the Year Award from the Maryland Energy Administration were given to Treasurer Maurer in 1994. Among many other publications, she was listed in Who's Who in America, Who's Who in American Politics, Who's Who of American Women, Foremost Women of the Twentieth Century, and Community Leaders and Noteworthy Americans.