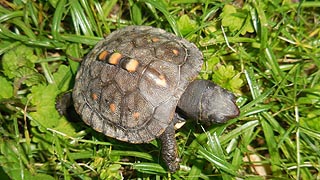 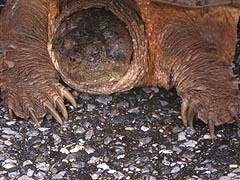 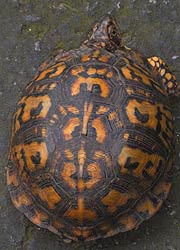 As diverse as their types, Maryland reptiles have many options during the colder months. In addition to hibernation and migration, brumation is a trait unique to reptiles. When reptiles brumate, they remain semi-dormant, going months without food. Still, they remain aware of their surroundings, but only move to secure water. 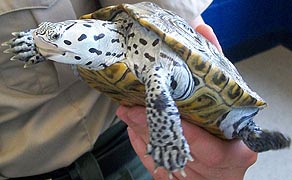 A permit may be necessary to own a reptile, but one is required in order to breed or sell native species. 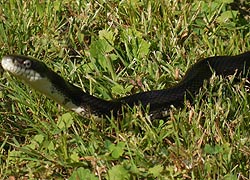 Classified as testudines, turtles come in many shapes and sizes. From the Diamondback Terrapin, to the Loggerhead Sea Turtle, Maryland exemplifies this diversity. Known as "sea turtles", members of the Cheloniidae family possess distinct flippers instead of legs, and spend most of their lives underwater. Due to human and animal predations (as well as risks associated with their extensive travels) all species of sea turtles found in Maryland are classified as either endangered, or threatened. 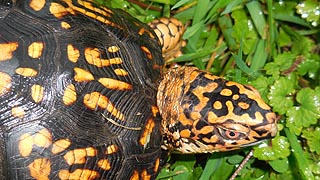 In Maryland, snakes are found mostly in rural and wooded areas. While most are harmless to humans, two species are poisonous: Copperhead, and Timber Rattlesnake.

Whether possessing flippers, feet, or nothing at all, numerous examples of Maryland's reptile populace are on display at the National Aquarium in Baltimore. 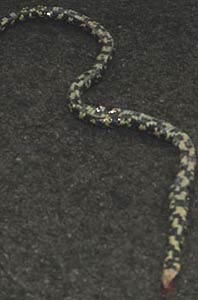 Kingsnake, Northern Mole (Lampropeltis rhombomaculata)
Carnivore; serpentes; nocturnal; 30 to 40 inches long; smooth, shiny body that is brown or olive with brown-red blotches on back and sides; yellow-brown belly. Lives in other animals' burrows or in the soil. Formerly known as Mole Kingsnake.

Lizard, Eastern Fence (Sceloporus udulatus)
Insectivore; lacertilia; 4 to 7.3 inches long; ranges from gray to brown. Female has black stripes along back. During mating season, male shows distinct bright blue patches on throat and belly. Prefers forests, and spends most of its life in trees.

Milksnake, Eastern (Lampropeltis triangulum)
Carnivore; serpentes; nocturnal; non-venomous; 24 to 36 inches long; slender body that is tan or brown with 32 or more red and black blotches down body in rows; gray or tan "Y,"- "V,"- "U,"- or "A"-shaped pattern at base of neck; checkerboard belly.

Queensnake (Regina septemvittata)
Carnivore; serpentes; diurnal; semi-aquatic; non-venomous; 13.5 to 23 inches long; color is brown or dark green on the top with a yellow stripe on the bottom; yellow-white belly with four dark stripes.

Racer, North American (Coluber constrictor)
Carnivore; serpentes; Dark gray to black coloring; averages 71 inches long. While classified in the constrictor species, the Black Racer actually does not constrict. Instead, it pins its prey by coiling around it, then swallows it whole. Formerly known as Northern Black Racer. 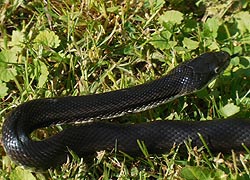 Seaturtle, Atlantic Hawksbill (Eretmochelys i. imbricata)
Carnivore; testudines; 30 to 35 inches long; brown, green, or black shield-shaped top shell, though some have the "tortoise shell" pattern; yellow bottom shell, chin, and throat; four overlapping scutes on each side of top shell; two pairs of scales between eyes.
Classified as Endangered in Maryland.


Skink, Coal (Plestiodon anthracinus)
Carnivore; lacertilia; 4.5 to 7 inches long; four light stripes on back and wider stripes on side; males have orange-red markings on the sides of the head. Formerly known as Northern Coal Skink.
Classified as Endangered in Maryland. 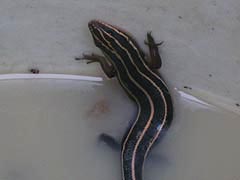 Skink, Common Five-lined (Plestiodon fasciatus)
Carnivore; lacertilia; 5 to 8.5 inches long; juveniles have five white or yellow stripes on the head, a black body, and blue tail; adult females have the stripes, but a brown body; adult males have some stripes and are tan or olive with jaws that turn orange during mating season. 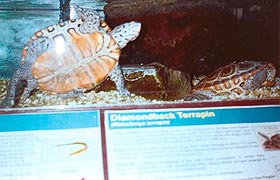 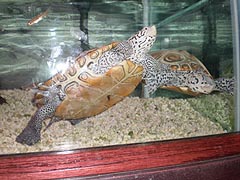 Turtle, Bog (Glyptemys muhlenbergii)
Omnivore; testudines; 3.5 to 4 inches long; top shell is black, olive, or brown and has knobs; scutes may have red or yellow starbursts in center; bottom shell is black with cream blotches; yellow, orange, or red patch on sides of head.
Classified as Threatened. 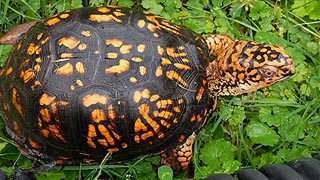 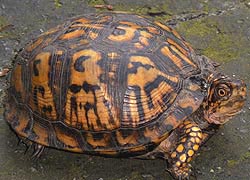 Turtle, Eastern Painted (Chrysemys picta picta)
Omnivore; testudines; 4.5 to 6 inches long; olive or black top shell with red markings on edge; scutes are in lines; yellow spots on either side of head and yellow striped along jaw and through eyes; black head; yellow or orange belly. 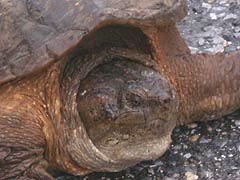 Turtle, Eastern Spiny Softshelled (Apalone s. spinifera)
Omnivore; testudines; 8 to 16 inches long; tan top shell has black circles, is flat and leathery, not scaled, and has spines at the front; bottom shell is white or yellow; elongated snout and large nostrils.
Classified as In Need of Conservation.

Turtle, Midland Painted (Chrysemys picta marginata)
Omnivore; testudines; 4.5 to 7 inches long; olive or black top shell with red markings on edge; scutes are not in lines, but alternate; yellow spots on either side of head and yellow striped along jaw and through eyes; black head; gray shadows on belly.

Turtle, Wood (Glyptemys insculpta)
Omnivore; testudines; 5.5 to 7.5 inches; top shell looks like wood; scutes are knobbed; bottom shell is yellow with black markings; nicknamed the "redleg" turtle due to the coloring on the bottom of chin and legs.