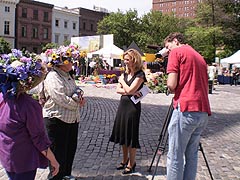 As early as 1876, the idea of television was emerging. With the telegraph, and early radio experiments, inventers began to envision a way to send images. They wanted to see as well as hear the person with whom they spoke and, in 1880, Alexander Graham Bell even delivered a model of his “photophone” to the Smithsonian Institution. Early inventions kept progressing and, in 1900, at the World’s Fair in Paris the word “television” first was used.

Though the first television broadcasts occurred early in the 1920s, not until 1927 was the public more exposed to the new media. On April 9, 1927, Bell Laboratories and the U.S. Department of Commerce broadcast a live, talking image of then Secretary of Commerce Herbert Hoover. Due to the lack of public and commercial broadcasting facilities, broadcasts were rare, and experimental in nature. Commercial television received world attention at the 1939 World’s Fair in New York, where RCA’s booth showcased the first televised Presidential speech, offered television “sets” (early televisions had to work in unison with radios to provide sound) for sale, and even allowed visitors to step in front of cameras.

Maryland has a long, and proud television heritage. It was Charles Jenkins, who in the 1920s was one of the first to broadcast images, and even started his own television station eleven years prior to the World’s Fair exhibit. In 1928, he was granted the first U.S. television license for W3XK, which he operated out of Wheaton, Maryland. He even broadcast the first television commercial in 1930. Since then, Maryland has created a plethora of programs that have been mimicked, and simulcast by the world.

The Buddy Deane Show was the inspiration for the play "Hairspray", and later two movies by the same name. The show featured rock and roll acts, and introduced new dances to Baltimore youth. Maintaining a regular cast of dancers, the show invited teens from local community centers as well. It ran six days a week between 1957 and 1964, when the show left the airwaves.

Dialing for Dollars ran for nearly thirty years on Baltimore's WMAR. First hitting airwaves in 1948, the popular game show picked its contestants at random from the phone book. The show ended in 1977.

Duckpins and Dollars became a national phenomenon that started in Baltimore in 1964, when WBAL created the game show to highlight the town's love for duckpins. The show was later picked up by other networks, changing the format as well as the name (Bowling for Dollars) and even adding a version called Pinbusters that targeted a younger audience with child contestants.

People Are Talking, a Baltimore morning talk show, first broadcast in 1978. It set the stage to introduce Oprah Winfrey to the world. Though she briefly anchored WJZ's evening news, it was her co-host duties with Richard Sher that bolstered Winfrey's career. She left the show in 1983, but it remained on air until 1988.

Romper Room spanned over forty years of Baltimore television. The show originated in Baltimore in 1953, and grew to international popularity through syndication and franchise shows. Nancy Rogers Claster was both the Baltimore hostess, as well as the hostess of the nationally syndicated show. Networks could either air the original broadcast, or produce their own version. Originally aimed at children ages 4 through 5, the show served as a substitute for kindergarten, which was not widely available at the time. The show remained on the air in the United States until 1994.

Public television also is available in Spanish on cable channels:

and without cable (though a digital receiver on your television is necessary to access them):