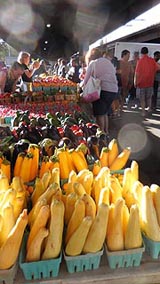 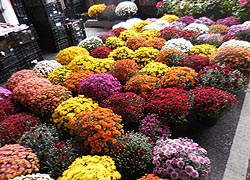 Maryland produce, in season, is available locally through weekly farmers' markets. Fruits, vegetables, and often an assortment of dairy products, baked goods, condiments, plants, floral bouquets, and other miscellany are sold locally at regional farmers' markets, usually once per week. At the same markets, crafts are sold, and sometimes books, clothing, jewelry, pottery, and musical instruments. Offerings are as varied as the interests of the local people. 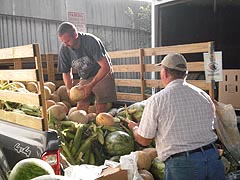 Some markets, such as Baltimore's Waverly Market (at 32nd St. & Barclay St.), and those at Salisbury, Takoma Park, and Kent Island, are open year-round. Most, however, open from early spring (usually April) to late autumn, ending just before Thanksgiving, though some continue into the winter. The largest of these, the Baltimore Farmers' Market, is held in Baltimore City on Sunday mornings (7:00 a.m. to noon). The Market is open from April 3, 2022, to January 29, 2023. It is located at Holliday St. and Saratoga St. under the Jones Falls Expressway. 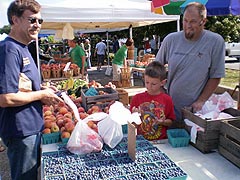 The U.S. Department of Agriculture's Farmers’ Market Nutrition Program awards grants to states and other government entities to provide nutritious food to low-income or at-risk individuals and seniors. Program recipients exchange the checks supplied by the government at participating farmers' markets for fresh fruits, vegetables, and herbs. Some 195 Maryland farmers participate in the Program each year, which runs from June 1 through November 30. All 110 recognized farmers' markets in Maryland have farmers who participate in the Program and accept its checks. In 2019, 11,855 low-income individuals bought $355,660 of fresh produce through the Program, while seniors spent $182,755.