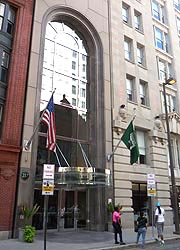 In the colonial period, much of Maryland's economy supported the Lords Baltimore, Maryland's Proprietors, and the office-holders under their patronage. By the time of the American Revolution, the City of Baltimore began to function as an economic hub for the fledgling state.

In 1838, the first Baltimore Stock Board formed, and in 1844, a second board was established as a marketplace for securities of government, municipalities, and corporations. From this second board, the Baltimore Stock Exchange was created in 1881. It functioned from 1881 until 1949 in what is now known as the Totman Building at 208-10 East Redwood Street in Baltimore. In 1949, the Exchange moved to 217 East Redwood Street, which, in 1987, became the site for the Department of Economic and Employment Development.