The Animal Control Authority is responsible for enforcing State and County animal ordinances. With approval of the County Executive, the Authority employs officers to monitor the issuance of vaccinations and dog licenses, conduct inspections of animal shelters and pet stores operating in the County, and impound dangerous or nuisance animals. Animal control officers also enforce the rulings of the Animal Appeal Board (County Code, secs. 133-1 through 133-23).

ANIMAL APPEAL BOARD
The Animal Appeal Board hears appeals from the County Health Officer regarding an animal's classification as dangerous. Rulings of the Board may be appealed to the Circuit Court.

Advising the County Council on animal-related legislation, the Board also advises the County Executive on budget matters related to animal control expenses and fines issued.

Five members and two alternates constitute the Board. Members are appointed by the County Executive with County Council approval to three-year terms (County Code, sec. 133-20).

Incarceration and rehabilitation programs are administered by the Department of Corrections, which oversees the Detention Center. The Department is responsible for the treatment and needs of inmates and those awaiting trial in County custody. Receiving those arrested in the County, the Department processes and detains them, pending judicial review. For inmates being released, the Department conducts pre-release programs, and oversight once paroled (County Code, secs. 20-1 through 20-5).

The Department of Corrections includes the Central Booking Unit, Community Corrections, and the Detention Center. 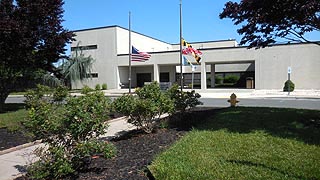 DETENTION CENTER
The Detention Center originated as the Wicomico County Jail, which was constructed in 1878. Originally, the Jail sat behind the County Courthouse on North Division Street in Salisbury. In 1936, a new building was erected at the same location to house the Courthouse, the Sheriff’s Office, and the Jail. Under its current name, the Detention Center moved to its present location at the Public Safety Complex on Naylor Mill Road in 1990.

With a maximum capacity of 509, the Detention Center holds those awaiting trial and those convicted to sentences of up to eighteen months (County Code, sec. 20-2).

Due to national safety concerns, Wicomico County Civil Defense was created during the 1950s to oversee County emergency planning and response. It was renamed as Emergency Management in 1993. To coordinate fire and emergency medical responders, Central Alarm formed in 1975, and in July 1997 merged with Emergency Management to form the Department of Emergency Services.

The Department of Emergency Services develops the County's emergency plan for disaster preparation, response, and mitigation, and receives all 911 calls. Calls are received through the Communications Center, which coordinates response units to most efficiently and effectively respond to emergencies. Response units include municipal and independent fire companies, municipal police departments, the Sheriff's Office, and the Department of State Police. During disasters, the Department of Emergency Services coordinates federal, State and local response and relief efforts (Code Public Safety Article, secs. 14-109 through 14-113; County Code, sec. 15-1 through 15-12). The Department also provides Citizens Emergency Response Training, which offers emergency medical and response training to County residents.

For the Lower Eastern Region (Dorchester, Somerset, Wicomico & Worcester counties), the Deputy State Fire Marshal serves as an assistant to the State Fire Marshal, and is responsible for fire safety in the Region. The Deputy investigates and enforces laws regarding arson; fire prevention; the installation and maintenance of fire detection and extinguisher equipment; the availability and adequacy of fire exits at public and commercial establishments; and the storage, sale, or use of explosives and combustibles (Code Public Safety Article, sec. 6-305).